The US Department of State’s Bureau of Educational and Cultural Affairs and the National Basketball Association (NBA) saw the completion of first ever 9-day sports envoy trip, bringing NBA Hall of Famer George ‘The Iceman’ Gervin and two-time WNBA Champion Katie Smith to Mumbai and New Delhi from February 22nd – March 2nd. As part of this trip, they conducted basketball clinics with the Indian youth, met with university students, and participated in local community events in underserved areas. 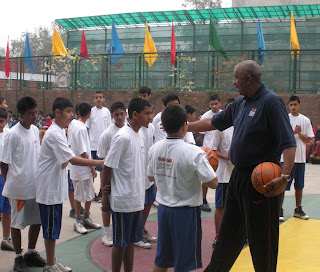 “We want to use basketball as a tool to make sure that children get a good education,” said Gervin, who runs the George Gervin Youth Center in San Antonio, a programme to help benefit youth development.

Gervin said that although he has been working with children in the past, this was his first time making this type of international trip. “I love working with young kids, and I have enjoyed myself in India. What better market is there for basketball than India? The game here is not as popular, but it has a good foundation to grow. There are a lot of players now from Europe in the NBA, and I don’t see why India can’t be next!”

In addition to participating in events with the US Department of State, Gervin and Smith attended the finals of the Mahindra NBA Challenge, the largest, multi-city basketball league in the country, which the NBA conducts with the Basketball Federation of India (BFI). The Finals were conducted in Mumbai on Saturday, February 26th at the Don Bosco High School and in Delhi on Sunday, February 27th at the Oxford Senior Secondary School. 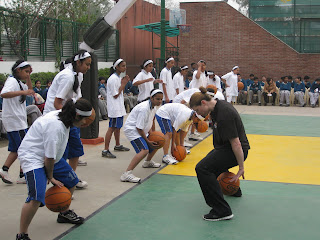 Katie Smith encouraged the young basketball players to focus on their practice to improve. “In basketball just like anything you want to be good at– homework, music, sports – you have to keep practicing. It might seem hard right now, but the more you practice the easier it becomes.”

Smith also spoke about the influence of international players to basketball in the US. “The foreign players are very versatile, and we learn from them, just like they learn from us.”

For aspiring basketball players in India, Smith said: “You have to keep playing, keep enjoying, and get involved from a young age. Basketball is a fun game and can take you a long way – just like it has helped me travel the world!" 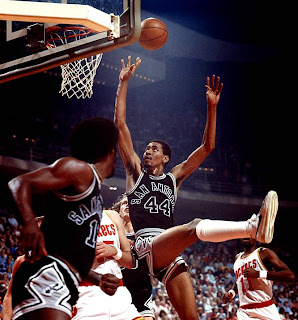 Apart from the Mahindra Finals, Gervin and Smith held basketball clinics at several other locations in Mumbai and New Delhi. In Mumbai, they participated in a clinic at the YMCA International Court, visited a special programmea the Phoenix Mills Compound in Lower Parel, and held a special Women's Empowerment Clinic at Sophia College for students from Sophia College and SNDT Women's University. They also held a basketball clinic with students of Magic Bus, a non-profit organisation working with children from marginalised backgrounds. 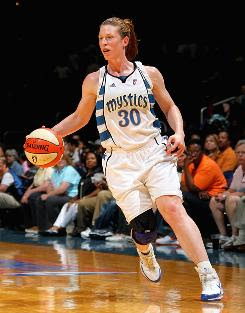 George Gervin was a major star in the ABA and the NBA in the 70s and 80s. He played for the Virginia Squires, San Antonio Spurs, and Chicago Bulls in the ABA/NBA, becoming a three-time ABA all star, nine-time NBA all star, and named seven times to the All NBA team. He was also the MVP of the 1980 NBA All Star Game. He finished with an NBA career average of 26.2 points per game and ended his basketball playing career with a succesful stint in Europe, playing in Banco Roma (Italy) and TDK Manresa (Spain).

Katie Smith played college basketball at the Ohio State University and currently plays for WNBA team Washington Mystics. She is a two time WNBA champion (2006 and 2008) with the Detroit Shock and was also named the 2008 Finals MVP. Smith is a 6 time WNBA all star and has won the Olympic Gold Medal there times (2000, 2004, 2008) with the USA basketball team.
Posted by KARAN MADHOK at 12:01