An afternoon at the Mahindra NBA Challenge 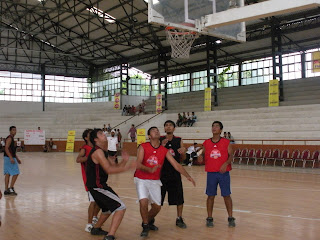 Ever since the announcement several months ago that the NBA was going to be organising recreational leagues around India, I have been curious to attend and watch the proceedings. The Mahindra-NBA Challenge has already concluded in Mumbai, and is currently in progress in Bangalore and Ludhiana. The latter was the closest destination to me, so I decided to finally take the plunge and mark my attendance.

Now, I admit I have been an unfair critic of Ludhiana in the past: although it may lack the big city status that Mumbai and Bangalore carry, it makes up for it with its historic basketball pedigree. I didn't really know what to expect when I visited the Guru Nanak Stadium on Saturday, but I left feeling a) impressed at the amount of passion that basketball evoked amongst the kids here and b) envious that I didn't have the same opportunities growing up!

The league was fully under way. Nine matches had concluded before lunch in the three courts (two outdoor and one indoor), and with the same expected to be played in the afternoon. I got the opportunity to catch a junior boys (U17) game between Ludhiana's Greenland Senior Centre School (in red) and the New Public School from Chandigarh in Black. The league was initially made open for any kind of team or school from Ludhiana to sign up, but soon, as popularity grew, sign-ups opened up for other teams from around Punjab, too. No wonder that Troy Justice, the NBA's head of Basketball Operations in India, had commented that he faced a "wonderful problem" of having to deal with too many teams! 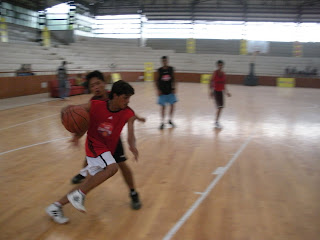 As I watched the players in their pre-game warm-up drills, I couldn't help but think about the great number of talented and passionate lovers of basketball around India. There is no shortage of young players, but the sad part is that most of them quit the game as they get older. Some of the most talented ones are picked for state teams, but the rest just decide to settle for some other profession. Eventually, even the ones that are picked start to become disillusioned with the lack of ambition and the low ceiling for progress surrounding the game in India. I'm hoping that with more avenues, such as the upcoming professional league in India, we can convince more such youngsters to not quit on the game and become talented senior players.

There was a small but interested crowd in the arena. The numbers began to grow steadily, and I was most impressed by a bhel-puri vendor that drifted inside to find customers - hey, if the vendor believed that it was worth his time to sell to an audience here, then it says something positive about the spectacle that is gathering enough of an audience!

Back to basketball, though, here is another thought that passed my head as I watched these youngsters: We really need to shift the attention in India away from the bureaucrats, administrators, coaches and other alumni of the game and make the young players the stars. Players of yesteryear have incredible passion towards helping the game of basketball, but that passion needs to be channelised away from a thirst that many of them have for buttering their own legacy and towards the youth. This is a tough call, because it would be breaking an Indian mentality of seniority and unquestioned respect to the elders. Of course, the seniors need to be respected for their efforts and lauded for still being involved with the game, but we need to move on from the old mentality and make the current players the centre-pieces. It is they who make the basketball masses today and deserve most attention. 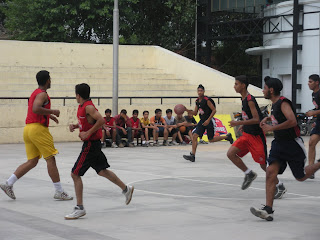 Speaking of the youngsters, ten of them were now ready on the floor for the game's tip-off. The game started exactly 23 minutes late. I had overheard a prediction during the pre-game preparations that this match-up was going to be one-side towards the New Public School from Chandigarh, and minutes after the game began, the squad from Chandigarh didn't disappoint. They quickly raced to a huge lead, stealing every loose pass, converting every fast-break lay-up, hitting their outside jumpers, and making it damn near impossible for the Greenland School to score.

Yes, these kids definitely needed a lot more work to improve their game, I don't think that with some strenuous, focused coaching, they could be that far behind. The Mahindra NBA Challenge has at least encouraged these kids and other amateur players to treat a basketball competition seriously, and I predict that by next year, we will see teams twice as talented taking part in this competition.

New Public School were led by Sartaj Sandhu, who seemed to be at least three steps ahead of everyone else on court. He won every rebound which was in his vicinity, scored more than all of his teammates combined (and more than all of the opposition combined, too), plus he hounded his counterpart defensively, racking up steal after steal. He had a devastating offensive game, scoring every open long-range shot and was unstoppable when he decided to drive in, too. Well, we could probably credit the Mickey Mouse defence played by the Ludhiana squad for that one.

New Public School held on to a 30 point lead by the end of the first half. It was all garbage time after the interval.

I strolled to watch the games outside after the one inside finally came to its inevitable conlusion. Even a light drizzle couldn't stop the two outdoor games (one boys' and one girls') from losing their pace! And yes, there was a much bigger crowd out here, which could only meet one thing - more snacks! Bhel-puri-wallahs were joined by vendors selling cotton candy, popcorn, and ice cream. Where there is snacks there is excitement. Book it.

Anyways, I came away feeling positively positive after my few hours at the Guru Nanak Stadium. Ludhiana and Punjab are proudly flying the flag for basketball in the country, and the NBA Challenge has provided an excellent base for the young players to finally get a chance to play ball in an organised fashion - with official refs, good coaching, and under the expert eye of NBA trainers that pay regular visits to these leagues as well.
Posted by KARAN MADHOK at 17:31