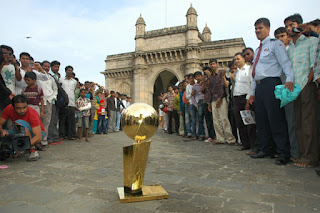 Time to rejoice: For all those in Chennai and New Delhi, watching enviously as the NBA's recreational league the Mahindra NBA Challenge took place successfully in Bangalore, Mumbai, and Ludhiana, your dreams have been answered. The news was announced under the eyes of reigning two-time NBA champion Pau Gasol and under the gleam of the Larry O'Brien NBA Championship trophy. The NBA Challenge will now expand to New Delhi and Chennai in its second season after the success of the league in the other destinations and the high demand from these cities.

The Mahindra NBA Challenge will take place to five cities in 2011. The programme, which targets boys and girls aged 14 and above, will make first-time stops in Chennai and Delhi along with return visits to Bangalore, Ludhiana and Mumbai. This was announced today at a press conference at Mahindra & Mahindra in Mumbai, in the presence of Akash Jain, NBA Director of International Development in India, and Harish Sharma, Basketball Federation of India (BFI) Secretary General.

The inaugural Mahindra NBA Challenge, conducted in collaboration with the BFI, was held this summer and featured leagues in Mumbai, Bangalore, and Ludhiana that attracted thousands of participants, including top players from each city and members of the Indian National Team. NBA All-Stars Dwight Howard of the Orlando Magic and Gasol of the Los Angeles Lakers travelled to India this summer to run clinics for participants and coaches.

“The first season of the Mahindra NBA Challenge was extremely popular in the Indian basketball community, and we are excited to expand the program to Chennai and Delhi next year,” said Ruzbeh Irani, Executive VP, Corporate Strategy and Chief Brand Officer, Mahindra, & Mahindra. “The growth of this program demonstrates the shared commitment by Mahindra and the NBA to promote a healthy and active lifestyle among Indian youth.”

The Mahindra NBA Challenge runs for seven weeks in two divisions: youth aged 14-17 and Adult 18+. It provides both basketball enthusiasts and newcomers the opportunity to learn the fundamentals of the game and apply their skills in a fun, competitive environment. BFI and NBA partner to implement and oversee league operations across all markets.

“We saw tremendous interest and enthusiasm for the inaugural Mahindra NBA Challenge, and we look forward to returning with an expanded schedule next year,” said Akash Jain. “Giving young basketball players the chance to play in an organized league and learn from NBA players has generated great interest in basketball in India, and we will work closely with Mahindra and all of our partners to further grow participation in the game.” 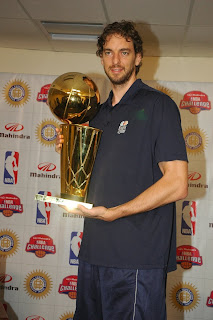 “We have seen an incredible response to the Mahindra NBA Challenge in Bangalore, Ludhiana and Mumbai this year, and we anticipate the same reaction in Chennai and Delhi, two strong markets for basketball participation,” said BFI Secretary General Harish Sharma.

New Delhi and Chennai are easily the next most obvious destinations for these type of an event. Both are large cities with a great number of basketball players who would relish at the opportunity of taking part in a league like this.

I'm pencilling in Pune, Hyderabad, and Varanasi for next time around!
Posted by KARAN MADHOK at 17:54