The first thing I notice is his shoes. Size 22, made of some obscure shoe brand that I haven't heard of. That is the first thing I ask him, too, and he confirms to me that they are custom made. "Straight from Amreeka!" he says. He confirms that he has another, better pair coming his way. Sure enough, the next time I meet him, he is sporting a pair of black Nikes. Size 22. 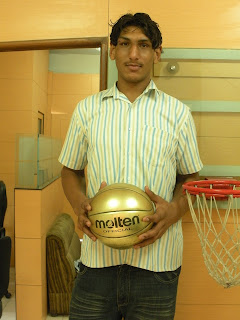 I shake his hand and watch my fingers disappear behind his monstrously large grasp. When we disengage, I'm relieved to have my hand back unharmed. It seems that Satnam, still only 14, has learnt to exert minimal pressure during introductory handshakes, because a casual clasp by him could mean certain broken bones for us mere average-sized mortals.

Meet the Satnam Singh Bhamara of the Past: a village boy, a son of a farmer and carpenter from the middle of nowhere in Punjab. His home address has no house number, just a family name and the name of their village,'Ballo Ke'. "District Barnala," he adds, and then he says a few other things in Punjabi so thick that I had to occasionally call on a translator (and I call myself a Punjabi - tssh!). I'm not ashamed though, because even a pucca Punjabi would be confused with his thick accent; his words come out muffled, half-eaten on their way out of his giant mouth.

Until the age of 10, Satnam was just an average youngster who attended a village school and brought refreshments to his father who was hard at work at the farm.

Well, not completely average: Mr. Bhamara Senior stood an imposing 7 foot 2 inches; his 10-year-old son, who seemed to be following in his father's giant footsteps, was already 5 foot 9 and a big, broad, beast of a pre-adolescent. Satnam had never even heard of this game called 'basketball'; not until one of this father's friends saw him and recommended that he take the boy to Ludhiana and teach him the game.

Satnam only needed a few years of work before his coaches realised that there was more to his skill than his size. He was soon a natural, and like every young player, still fondly remembers his first dunk (age 13). He grew a ridiculous 15 inches in four years, and after blazing his way through all the sub-junior competitions, he forced his way into the Youth (U16) team.

Meet the Satnam Singh Bhamara of the Present: still four months shy of his 15th birthday, Satnam now stands 7 feet tall. He's already made a name for himself in the Indian basketball circles across the country. After blazing his way through the Punjab inter-school and junior leagues, Satnam began to collect his international credentials. He represented Indian in the FIBA Asia U16 Championships at Malaysia in November 2009. Back home, he took Punjab to the gold medal of the National Youth Championships at Trichy (Tamil Nadu) in June.

There was no more doubt it - the son of a farmer, who would've had a hard time pronouncing 'basketball' four years ago, had become the country's best young player. Satnam's success led him to be recommended by the Basketball Federation of India (BFI) to be part of a three-player contingent of Indian youngsters sent to Singapore for the NBA's Basketball Without Borders (BWB) Asia camp, which featured 44 junior boys from 19 different countries in Asia and Oceania.

And then came the biggest step yet - barely returned from his BWB experience, Satnam was again nominated amongst 50 of the country's best sub-junior players to take part in a tryout for the IMG Basketball Academies in Florida, USA. Sponsored by IMG-Reliance, expert coaches from IMG descended down to Delhi to watch the Indian youngsters slog it out for two tough days in late July. Only eight of the 50 were to be chosen. Satnam was taller, stronger, bigger than the rest.

When the final list was released, not one was surprised to see Satnam's name amongst the eight. Dan Barto, who is a basketball coach and athletic trainer from IMG, admitted that the youngster was an "intriguing" prospect. By the end of the August, Satnam will be taking his talents to Bradenton, Florida, where he has been fully sponsored to stay as a student-athlete at the IMG Academy, perhaps the best multi-sport training facility in the world. The Basketball Academy at IMG has featured the likes of Kobe Bryant, Vince Carter, Chauncey Billups, Joakim Noah, Kevin Martin, Jrue Holiday, Earl Clark, Kyryl Natyazhko (freshman at the University of Arizona), Dwight Powell (committed to Stanford), and others.

His world about to turn upside down, Satnam seemed surprisingly bindaas about things. He had a childish exuberance about him, and then I remembered that's because he is still only a child!

I ask Satnam if he follows the NBA.

"Which is your favourite team?" 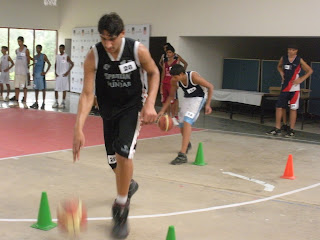 "Oh - Lakers," I laugh, "But shouldn't you like a player closer to your size. A centre. Kobe Bryant must look small to you."

I shudder as I say that. If Kobe friggin 6 foot 6 Bryant is small compared to him, I'm closer to being a Leprechaun.

"Oh, ya, Shaq!" his eyes light up - Shaq seems to have that effect on people - "I like Shaq! And that other guy who is coming here - what's his name?"

"Dwight Howard," I tell him.

"Yes, Dwight Howard. I want to meet him."

I remind Satnam that he's bigger than Dwight, too. He may not garner the same kind of attention that 'Superman' did during his visit to India, but Satnam has his own little celebrity legend. He gushes and tells me how strangers ask him for autographs and ask to touch him. He tells stories of how he has to struggle and fit on a bus seat from Delhi to Ludhiana, and how people on the bus line up to photographs snapped next to him.

But despite his growing popularity, the young man-child has managed to remain humble. Credit his farm upbringing, the advice of his many coaches, and the fact that a committed basketball player rarely has time to concern himself with other things. In Satnam, India has been blessed with a hell of a committed player.

"I'm very fond of this game," Satnam says, "It was given me so much, and I want to continue improving."

Before he took claim to the giant centre position on the floor, Satnam was initially trained to play as a forward. His early training shows - he is an efficient shooter from the three-point range and says that his strongest feature is probably his ability to drive the ball in. With size came the evolution of polishing his post-up game and making him devastating on the defensive end of the floor as a rebounder and a shot-blocker. Few brave souls would dare run full speed into this giant brick wall guarding the basket.

"I still have to improve my dribbling though," he concedes.

More than any one specific thing, I believe what Satnam needs is experience playing games at the highest possible level for his age, and this is where his stint with the IMG Academy will be nothing short of life-changing.

So what will we see in the Satnam Singh Bhamara of the future? If all goes as scripted, he has the potential of becoming one of the finest Indian players of this generation, if not one of our brightest prospects ever. Alas, few scripts in real life have this kind of filmy ending - in Satnam's case, each Indian fan will be hoping for the holy grail of basketball for him.

He has ambitious dreams, but the NBA is the toughest of all basketball nuts to crack - time will tell if he will ever become good enough to ever play there. Fortunately for Satnam, all the signs are pointing the right way. His greatest assessment came out of a man who knows a thing or two about basketball talents. Troy Justice, the NBA's Director of Basketball Operations in India, worked with Troy and the rest of the Youth team at Ludhiana a few weeks ago. "If I could, I would work with this kid every day," Troy said, "He can be the chosen one for basketball in India."