In the last few months, first there was Mahindra teaming up with the NBA to promote the Mahindra-NBA Challenge. Then there was Reliance who teamed up with US-based sports marketing company IMG Worldwide to develop sports facilities and leagues in India. Now, with the appointment of United Phosphorus Limited (UPL) CEO Jaidev Shroff as the president of the Maharashtra State Basketball Association (MSBA), it seems that another large corporation has joined the race to profit through sports, and specifically, basketball.

The MSBA unanimously elected Shroff as president recently. Shroff has been supporting several sporting events in different fields for the past 15 years. This will be a crucial time for Shroff to take over the MSBA helm as basketball is growing at an unprecendent rate in Maharashtra and in Mumbai (which was crowned as India's Basketball City on this site).

Shroff has a corporate background, and the UPL has been supporting two annual basketball tournaments in Mumbai - the Ramu Memorial Tournament and the Savio Cup.

Commenting on this situation, MSBA Secretary M Venkatesh, said, “Maharashtra has been a strong hub for basketball. With the National Basketball Association (NBA) lending its might in promoting the game, the MSBA is eager to utilise this opportunity to further strengthen the game. The Association will focus on the grass root level, increase the participation of athletes as well as train talented players to increase the overall standard of the game in Maharashtra.”
Laying down his vision, Shroff said, “The responsibility is huge, but I'm sure I will get the complete support from all office bearers to promote basketball.”

Shroff stated that the involvement of corporate houses in the decision-making process of sports administration is good news for Indian sports and would take it to a new horizon. "The UPL Group has always supported the sports in India by offering scholarships to deserving students and we will continue to do so in the future."

One of the future (perhaps exciting) plans for the UPL with the MSBA is to introduce the 'Hoop-A-Loop League' - not really sure what it is, but it will be played in the weekends in Mumbai.

Led by the commercially super-succesful IPL, India seems to have truly woken up to the business of sport. I'll quote Abhaya Srivastava from his recent article on this growing phenomenon: "For many the success of the IPL was a symbol of the new India -- an emerging economic powerhouse, pumped up with self-confidence and aspiring to assert itself in the global arena." Srivastava goes on to say that allegations of corruption, money laundering and tax evasion in the IPL have tarnished the sports/business relationship a little bit, but I don't believe that it is enough to stop this expanding snowball. The IPL will survive the scandal and continue successfully, and from the looks of it, other corporations will continue to see green in sports, too. 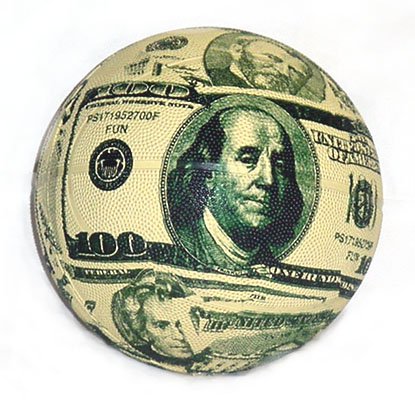 Has the time truly arrived for India to take sports seriously? When I say 'seriously', I mean in the only way that really matters for a sport's promotion, through money. Mahindra, Reliance, UPL... these are all big companies with big money to potentially invest in basketball. Forget about our socialist beginnings, India is now an uber-capitalist country where to really make it you have to make it by yourself. No government is going to be there to hold your hand through it. I have been a staunch believer that success stories in India have really come despite the government, and this belief holds in the case of basketball, too.

There is of course the ugly, annoying negative side. We have all seen it happen with the IPL. Advertisements during ball breaks, commercial breaks interrupting crucial replays, a six being called a DLF-Maximum and (well respected) commentators being obliged to mention the MRF-blimp every chance they get. It's tragic to see when celebrities are celebrated more than cricketers. Capitalism in sport is a double-edged sword, because if corporates decide to sell-out basketball the same way they did with T-20 cricket it would popularise the game to a wider audience but simultaneously take the focus and soul away from the game itself.

There needs to be a sensitive balance between commercialisation and maintaining the soul of the game, and the next few years could be very telling in the growth of basketball in India.

Do you agree with Shroff? Is the involvement of corporate houses in the decision making of sports, and in our particular case, basketball, a good move for Indian sports?