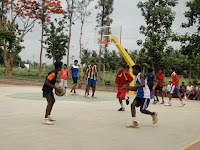 Gearing up for a summer of basketball? Well, a lot went down at the Don Bosco School in Tumkur (near Bangalore) last week, when Subhash Mahajan of the Sumpoorna grassroots basketball movement continued to involve young kids into basketball with a pre-season tournament of the Sumpoorna Annual Basketball League (SABAL) from 19-21 May.

Around 60 kids, under the age of 15, participated in the games, and they were divided into 12 teams to match the 12 seasons of a year - January to December... The kids were allowed to scrimmage during the first two days of the camp, and then were divided into well-balanced teams. Students from the Sumpoorna Basketball campus in Tumkur played alongside students of the Don Bosco School.

"It was nice to see that even the students who didn't have the basic knowledge of basketball learnt quickly from the others and subconsciously copied them," said Mahajan, "It became easy to get through rules and violations to them, like travel, illegal screens, or different kinds of fouls."

"We have good relationship with Don Bosco, and we want to make more relations with other schools around the region for more basketball," Mahajan added. "At Don Bosco, they lack coaches, and we wanted to embed our players and coaching with those players."

The full season of SABAL begins in about a month, the 26th of June. Mahajan is looking to glamourise the event by involving corporate sponsorships and to provide uniforms to the children.

"We are hoping to form a network of over a 100 schools by the end of the season."

The Sumpoorna Basketball School is a basketball movement in South India hoping to popularise basketball and teach basic skills to younger children. Mahajan, its founder, has always believed that the best way to make the game approachable for children (and parents) who are averse to sports and basketball specifically is to create a relaxed environment in the game.

Sumpoorna has been slowly growing in small, rural town of Tumkur over the past five years. Driven by a lifelong love of basketball, Mahajan has set up this basketball camp mostly for small town and village youth, which has grown over the years to have taught basketball basics to up to 6,000 youngsters around the rural area, and launched the Sumpoorna Basketball Tournament where dozens of small school and recreational teams compete against each other.