Basketball's new, short version took another successful step towards its exponential growth this week. In Mongolia, the top 3x3 basketball teams from Asia and Oceania took part in the 2nd FIBA 3x3 Asia Cup in Ulaanbaatar from October 27-29. A total of 27 men and women's teams participated in this quickfire tournament, including teams from India. By the end of Sunday, hosts Mongolia took home the Men's gold in front of their home fans, while Australian women finished atop their division. 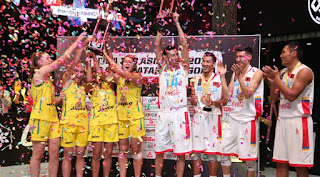 In the tournament's previous iteration in Qatar, India's women won the gold medal. This time around, however, they were ousted in the semi-final stage and had to settle for fourth place. India's men's team failed to make it out of the group stage and finished at ninth.

Mongolia met New Zealand in the Men's final and pulled away in the final minutes for a 19-14, thanks to the play-making of MVP Dulguun Enkhbat and the scoring of Tsenguunbayar Gotov.

Australia, in their debut in this tournament, were led by MVP Isabell Bourne en route to a 21-15 victory in the women's final.

India's women, a team that featured Shireen Limaye, Jeena Scaria, Raspreet Sidhu, and Grima Merlin Varghese came into the tournament with aspirations to defend their gold medal from Qatar. In the group stage's Pool D, India beat Kyrgyzstan in their first game 20-12, but lost to New Zealand in nail-biter 16-15. India defeated Mongolia in the Quarter-Final 16-14, but their entry to the finale was blocked by Malaysia who defeated them 19-13. India's final game was a third-place matchup against China, which they lost 21-16 and finished fourth.

India's men's team featured Ravi Bhardwaj, Anil Kumar Gowda, Gurvinder Singh Gill, and Jeevanantham Pandi. They had to begin the tournament in the qualifying round. After losing to Chinese Taipei 21-15 in the first game, they defeated Lebanon 21-19 to sneak into the group stage. Here, they lost both of their matchups, first to China 22-15 and then to Kyrgyzstan 21-19, and their hopes of making the knockout rounds were dashed. India finished at 9th place.