They call him "The Professor" in NBA circles. Andre Miller played seventeen years in the NBA and finished his career ranking top-ten in assists in league history. And yet, he never played in an All Star Game, was never considered for an All NBA Team.

Miller's majestic quality to NBA lore came in the form of quiet, efficient leadership. For seventeen years, he played for nine different teams, spreading his wisdom and spreading the offense, helping talented players get open shots, young players learn from his experiences, and when asked to, dropping in a good share of points on his own. Now, the retired NBA player will bring his valuable dimes to basketball's next big market - India - to support the continued growth of basketball in the country. 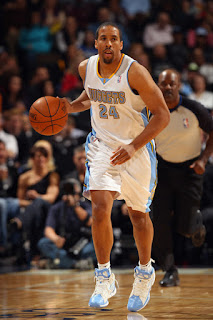 Miller will travel to Delhi-NCR on October 30th, where he will visit the NBA Basketball School. On October 31st, he will lead a clinic at the NBA Academy India in Greater Noida. During his trip, he will also appear on the 'Around the Hoop' NBA roundtable show on Sony SIX in Mumbai.

"I'm looking forward to my first visit to India to see firsthand how the NBA has been developing basketball in the country," Miller said. ""I understand there's a lot of potential in India, and I'm excited to contribute to the growth of the sport."

Originally drafted by the Cleveland Cavaliers in 1999, Miller played arguably the best basketball of his career in a Cavs jersey, highlighted by the 2001-02 season when he finished with 16.5 points per game, a career-high and league-leading 10.9 assists per game, and a career-best 4.7 rebounds per game. From then on, he became a league journeyman, suiting up for the Clippers, Nuggets (twice, and for the longest duration of his career), 76ers, Trail Blazers, Wizards, Kings, Timberwolves, before retiring after a final season with the San Antonio Spurs. His best scoring output was with the 76ers in 2007-08, and he retired with averages of 12.5 points and 6.5 assists per game for the course of his career. Miller only missed three games to injury in his 17-year career. He's the only player in NBA history to have at least 16,000 career points, 8,000 assists and 1,500 steals without making an NBA All-Star Game.

We welcome Professor Saab to India. Hopefully young players here will learn from him, just like some of the NBA's biggest stars have done over the years.
Posted by KARAN MADHOK at 20:21