The biggest date on India's basketball calendar is approaching this year - the FIBA Asia Women's Cup - and this year's tournament is going to be extra special: India will have the privilege and pressure of hosting this prestigious championship on their home soil, in Bengaluru, and this will be the first time that the FIBA Asia Women's Cup will incorporate the top teams from the Oceania region, too. Two years ago, India fell to lower level of this championship after a forgettable performance in Wuhan, China: now, playing on home soil, they will be hoping for extra motivation to rise back up the ranks of Asian basketball. 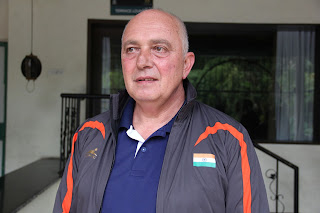 To help complete that complicated task, the Basketball Federation of India (BFI) officially announced the appointment of seasoned Serbian Coach Zoran Visic as the new Head Coach of the Indian women's national team. Visic took over Team India at the national camp from June 1 and will serve his contract until the end of July. The FIBA Asia Women's Cup is scheduled in Bengaluru from July 23-29, 2017. Before the big tournament, Visic and the squad will get a chance to play in preparatory games as they will also participate in the William Jones Cup in Taiwan from July 5-9. The BFI says that Visic's term may be extended after the end of July if mutually agreed by both parties.

Although he had already been working with the national team for two weeks, the BFI only made the announcement of Visic's appointment in a press conference at Bengaluru on Friday, June 16. BFI's President K Govindraj, Secretary-General Chander Mukhi Sharma, assistant coach Shiba Maggon, and senior-most player Anitha Paul Durai were present for Visic's official introduction.

"India has done a lot to improve in both the women’s and men’s sides [in the last few years]," Visic said at the press conference. "We are now in Division B. So for sure our target is to be once again in Division A. This is a new age for Indian basketball and I believe the girls have the confidence and pride necessary to deliver a good result." 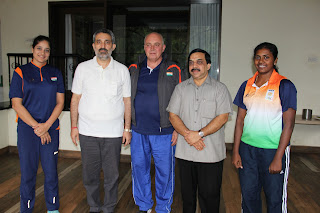 India have been drawn in Division B's Group A at the tournament, along with Sri Lanka and Uzbekistan - the fourth team in their group, American Samoa, has backed out of the championship. India's aim will be to top the entire division make it back up to the hither Division A for the next iteration of this championship.

Visic will be the first foreign coach with the national team since the departure of Spaniard Francisco Garcia in 2015. Although incorporating his leadership skills and experience with Indian coaches like Paramdeep Singh and Shiba Maggon should definitely assist the national team, it is still a pity that the BFI waited so late - less than two months before the championship - to bring in a new coach. Every coach has a different philosophy and system, and to truly make a change in the basketball programme, needs to understand the structure of the sport, recruiting, facilities, and other options thoroughly. Visic, unfortunately, will not have the time to pick his own preferred team for his preferred system, and will instead have to make do with the probables available.

Which is, of course, not to say that the available probables aren't top notch. India will feature a great mix of youth and experience at the championship this year, including the aforementioned Paul Durai, star player Jeena Scaria, Shireen Limaye, Poojamol Kochuparambu, Poonam Chaturvedi, Kavita Akula, Barkha Sonkar, and more. Unlike 2015, India will also get a chance to prepare for the big tournament at the William Jones Cup this year, and hopefully, the team is able to find some chemistry in this short period of time before the FIBA Asia Women tips off.

Visic (61) has been the head coach of Yugoslavia's Women's national team, Serbian junior national team, and has coached professionally in Serbia, Russia, and most-recently, in Romania, over the past 22 years. If he does a good job in India, I hope for some continuity at the top and for him to spend a longer time in developing the national basketball programme here.