In two months, India will once again step out to compete in the most prestigious basketball event they take part in, the 2017 FIBA Asia Cup in Lebanon. Despite being a rising basketball force in the continent, India has only recently begun to climb up the ladder in Asian championships. Last year, at the FIBA Asia Challenge, India finished at 7th place after their best international performance in 27-years. India now has the star-power, the hunger for success, and ample preparation for this year's big FIBA event.

But practice is practice, and as the great Allen Iverson would say, it's "not a game". India needs true in-game experience to be in the best shape and form possible. A few weeks ago, India completed a historic 5-peat at the South Asian Basketball Championship to qualify for the FIBA Asia Cup. Now, with greater competition in the horizon, India has an exciting new opportunity for high-level competition before heading to Lebanon. 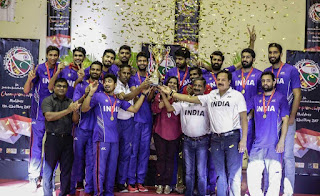 From June 17-21, India's Senior Men's Basketball team will be heading to the metropolis of Guangzhou in South China to take part in the 2017 BRICS Games. The "Young Cagers", along with the country's U20 Women's Volleyball Team and the Men and Women's Wushu teams will form the Indian contingent participating in the Games.

The BRICS Games 2017 is a tournament played among the BRICS countries (Brazil, Russia, India, China, South Africa) with a view to developing sports exchange and cooperation, and promoting mutual friendship. The host country of the BRICS summit organises the annual BRICS Games annually - this year's BRICS summit will be held in China in September. The choices of the games at the event differs each year. The basketball championship this year will be held in Round Robin format, with the best record declared the winner - India's match schedule will be announced soon. The potential to play high-ranking international teams like Russia, China, and Brazil should give India much-needed basketball exposure against elite talent.

India will be heading to Guangzhou with a strong squad coached by Sappaniambalam Baskar and headlined by Vishesh Bhriguvanshi, Amjyot Singh (who will return to the team after missing the SABA Championship), Yadwinder Singh, Akilan Pari, Rikin Pethani, and more. The big name missing this lineup is centre Amritpal Singh, who was a big part of India's SABA Championship victory but is unavailable since he has been invited to Australia to take part in the rookie camp for the Sydney Kings.