Indian basketball's finest head to Coimbatore for the 2017 Federation Cup

If the Senior Nationals are the largest showcase of talent in Indian basketball, then the Federation Cup is the exclusive inner-club, a competition among only the best of the best. Based on the success at the previous nationals, only the top eight men's and women's teams from the country are invited to this national tournament, setting up a tantalizing tournament of the finest cagers in the country. 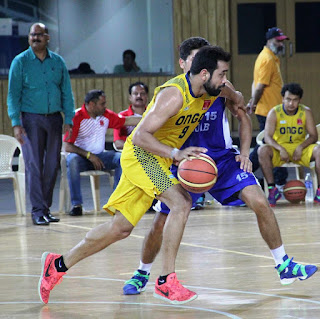 This year, the 31st Federation Cup All India Basketball Tournament for Men and Women - organized by the Basketball Federation of India (BFI) and the Tamil Nadu Basketball Association (TNBA) - tipped off on Wednesday March 22nd at the PSG Indoor Sports Complex courts in Coimbatore (Tamil Nadu). The 16 combined men and women's teams will play until the Finals on March 26th.

Reigning champions of the Senior Nationals and last year's Federation Cup Kerala Women will be hoping to continue their golden streak and win back to back titles. The Men's field has been dominated by ONGC (Dehradun) for the past four years, and they will be looking for an amazing fifth consecutive trophy in Coimbatore this year.
Posted by KARAN MADHOK at 22:36