In the largest and finest annual collection of Indian basketball talent, only the most toughest survive to reach the pinnacle, to gain the prestigious honour of being called 'National Champions'. At the 67th Senior National Basketball Championship for Men and Women - the 'Senior Nationals' - in Puducherry, a couple of wounded predators got their retribution. Uttarakhand (Men) and Kerala (Women) - both runners-up from the tournament in 2016 - found their salvation in Puducherry by winning the Finals of the Senior Nationals on Saturday, January 14. 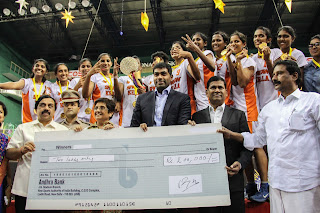 The 2017 Senior Nationals tipped off on Friday, January 7th at the Rajiv Gandhi Indoor Stadium in Puducherry. The championship was being organised by the Puducherry Basketball Association under the aegis of the Basketball Federation of India (BFI) and featured over 50 total men and women's teams from states and units across India.

The women's final pitted 2016 runners-up Kerala against the upstart team from Telangana, who had upset the mighty Indian Railways in the semi-finals and made it this far for the first time in their history as an independent state. Known for producing some of the best women's basketball talent in India, Kerala as a state had come short for over three decades at the Senior Nationals. When Telangana got off to a strong start on Saturday, leading 34-26 at halftime, it seemed that Kerala's misery would be stretched even longer. It took until the crucial fourth quarter for Kerala to bounce back, as they slowed the game down to a grind and began to dominate proceedings. Kerala outscored their opponents 22-8 in the final period On Saturday, and finally broke their 32-year curse to win the Senior Nationals gold with a 68-59 victory. Rising international star Jeena Scaria led Kerala with 20 while M. Gayatri scored 16 for Telangana in the loss.

The men's final pitted familiar foes and two heavyweights of Indian basketball - Uttarakhand and Tamil Nadu - against each other. Both teams had faced off in one form or another, including as ONGC and IOB, several times in big finals in recent years. Last year, Uttarakhand had bounced back from a 20-point deficit to beat TN in the Semi-Final, only to lose to Services in the final game. This year, TN, backed by nearby home support in Puducherry, hoped for a different outcome. But the result was decided chiefly on the talents of one exceptional superstar: Uttarakhand's and India's talented big man Amritpal Singh. TN had no answers for Amritpal, who scored 34 and caused havoc in the post all night. The two teams traded big runs back and forth in the first two quarters, but it was Uttarakhand who had the final word, finishing 23-16 in the fourth period to secure a 68-60 victory and their third national title in five years. 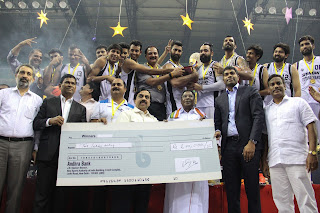 A felicitation ceremony was also held for the Indian national men’s squad which finished a historic 7th at the 2016 FIBA Asia Challenge (in Iran in September) and won a bronze medal at the 21st Super Kung Sheung Cup 2016 (in Hong Kong in December). The FIBA Asia Challenge squad won a total cash prize of Rs 5,00,000/-, while the Hong Kong contingent received Rs 1,45,000/-.

Earlier on Saturday, the third/fourth place matches were held to determine the bronze medalists in each division. The Women's bronze medal was won by Indian Railways, who survived despite a semi-final injury to their veteran Anitha Pauldurai to defeat Chhattisgarh 84-77. Navaneetha PU (21) and Sruthi Menon (16) led the way for Railways, overcoming another big game by Chhattisgarh's giant center Poonam Chaturvedi (31). The Men's game was a fun matchup between Punjab and the surprising semi-finalists from Rajasthan. Punjab relied on the explosiveness of point guard Talwinderjit Singh 'TJ' Sahi (21) plus contributions by Rajveer Singh (18) and Gurvinder Singh Gill (16) to win 88-70. Vinod Kumar (22) and Sharad Dadhich (18) led the way for Rajasthan in the loss. 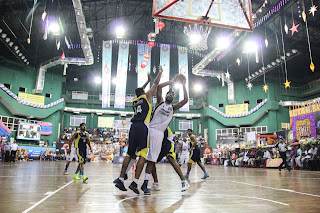 The BFI's President K. Govindraj also made several important announcements to the press on the day of the Finals in Puducherry. The big news was that India is setting up to host two major FIBA Asia tournaments this year: the Women's FIBA Asia Championship in Bengaluru, tentatively scheduled for September, and the FIBA Asia U16 Championship for Women, for which a city hadn't been decided yet.

The tournament concluded on Saturday with one major omission: Services. After some troubles between the federation and the units, it seemed that Services and Indian Railways had found a solution with the BFI to attend the Senior Nationals. Railways eventually attended, but Services - who won the 2016 Men's gold at the Senior Nationals - were last-minute absentees. 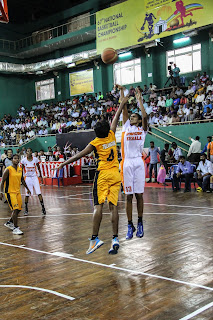