There are many different types of celebrations, and at the finals of the 31st Federation Cup National Basketball Tournament in Coimbatore (Tamil Nadu) on Sunday, the winners felt various degrees of joy. In the men's final, Dehradun's ONGC won their fifth-consecutive title, securing their legacy as one of the greatest units in Indian Basketball history. In the women's game, Chhattisgarh buried two years of disappointments by winning in the final stage and bagging the gold medal. 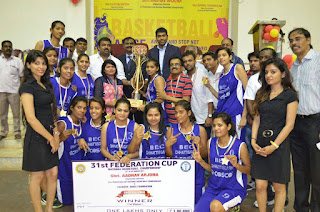 The Federation Cup - organized by the Basketball Federation of India (BFI) and the Tamil Nadu Basketball Association (TNBA) - was held from March 22-26 this year at the PSG Indoor Sports Complex courts in Coimbatore. The tournament is a sort of elite club of Indian basketball, featuring only the best eight each of men and women teams from the previous year's Senior National in competition.

ONGC were tested to the brink by their closest competitors in the country, IOB (Chennai) in the men's final, and it took a measured response by two of India's top international players - Vishesh Bhriguvanshi and Amritpal Singh (17 points each) - to help the Dehradun side slip by to a 55-52 win.

Several of India's most important players came head to head in the women's final between Chhattisgarh and Indian Railways. Chhattisgarh had lost at the final stage at the Federation Cup the past two years and trailed 44-42 at halftime on Sunday. But a strong second half surge and impressive performances by their centerpiece Poonam Chaturvedi (28) and forward Sharanjeet Kaur (27) helped Chhattisgarh finally win the gold, 77-67. India's experienced international player Anitha Paul Durai (23) and Neena (17) had strong performances for Railways in the loss. 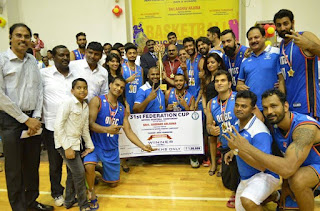 The third-place games were also settled on Sunday. West Bengal women were led by Madhu Kumari (22) and Libina MJ (16) in a statement big win over Tamil Nadu, 81-52. Indian Air Force (Services) finished third in the men's division with a 85-79 win over Karnataka's Army Service Corps and Centre.