Satnam Singh's legacy in the Indian Basketball Hall of Fame is secure. The first Indian player to be drafted into the NBA, Satnam was picked 52nd by the Dallas Mavericks last year and played last season with their D-League affiliate, the Texas Legends. 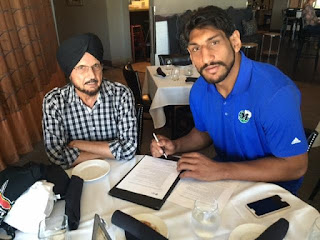 Now, with an assist back home, Satnam is hoping to make a more direct contribution to the rise of basketball in India.

Earlier this week, Satnam Singh announced that he has signed an alliance with Universal Basketball Alliance University (UBAU) and Elite University Sports Alliance of India (EUSAI) "to aid and enhance the advancement and infiltration of basketball throughout India". UBAU has been organising the All India Inter-Zonal Mens Basketball University Tournament for the last few years and has helped it gain in visibility through TV broadcasts and greater national news coverage. Satnam's role will be to help promote UBAU's national tournament. Going forward, the tournament's Most Valuable Player trophy will be known as "The Satnam Singh MVP Award".

The tournament, known as Indian Insanity, attempts to parallel the USA's March Madness. In addition, it is a rung in the ladder for players to move on to the affiliated UBA basketball league in India.

Ironically, for all his achievements, Satnam didn't attend college himself. He was recruited at 14 by the IMG Academy in Florida, where he played High School basketball, but could not meet the academic expectations to get a college scholarship in the United States. Instead, he declared for the NBA Draft at 19 and was picked by Dallas.