These are exciting times if you're a seven-foot-plus Punjabi guy that plays basketball. Earlier this month, the 22-year-old 7-5 Canadian-Punjabi Sim Bhullar became the first player of Indian-descent to play in the NBA when he featured for the Sacramento Kings. Just a few weeks later, India may get their first citizen a step closer to the world's finest basketball league. 19-year-old 7-1 talent Satnam Singh Bhamara - who hails from the Ballo Ke village in Punjab but has perfected his skills at the IMG Academy in Florida, USA - has now declared for the 2015 NBA Draft.

Bhamara, who has represented India at the the Senior and Youth levels multiple times as a teenager already, is one of the finest basketball talents to ever come out of the country. His fascinating story saw him emerge as a farmer's son from the tiny Ballo Ke village in Punjab at age 10 to quickly become one of India's hottest young talents in less than four years. At 14, Bhamara was selected by the IMG on a scholarship programme to learn the game further and play at the IMG Basketball Academy in Bradenton, Florida. He has been there since 2010, only to return to India for holidays or to play in occasional national/international tournaments. 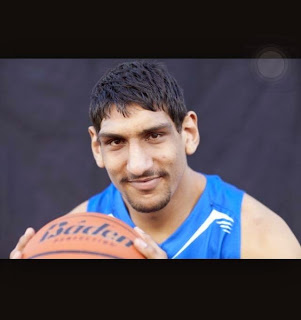 Last week, Sports Illustrated's Pete Thamel reported that Bhamara - after finishing High School - was not able to secure a college scholarship and thus decided to directly explore the NBA draft. Yesterday, the NBA made it official when they announced the list of early entry candidates for the 2015 draft, which included Bhamara.

"I've declared for the NBA draft," Bhamara told me via a Skype conversation from Florida earlier this week, "Currently, I'm taking part in pre-draft training with three other prospects at IMG. From the next month, I have to go and do practices and pre-draft workouts with a number of NBA teams that are showing interest in me."

Bhamara said that he has been offered a lot of assistance in the process of learning and game and moving forward with his NBA fans by IMG coaches Dan Barto and Kenny Natt, the latter of whom was India's national team basketball coach from 2011-12 and played Bhamara in several international tournaments.

"My coaches suggested that I should try for the NBA draft," Bhamara said, "I've spent the last year practicing and working out, playing with Coach Natt's IMG team. My coaches have been training me hard. I think I've never practiced this hard in my life. I've felt like I've been training in the army, like the Khalsa Army!"

Bhamara is currently in Florida at IMG Academy, where he played for the post graduate team and averaged 9.2 points, 8.4 rebounds and 2.2 blocks in less than 20 minutes per game for the No. 2 team in the country. He drew recruiting interest from Purdue, Pittsburgh, USC, USF and UMass. In his report, Pete Thamel opined that Bhamara's game is considered to have a bigger upside than his Canadian-Indian predecessor Sim Bhullar. But despite his basketball talents, he couldn't secure a college scholarship in the United States. 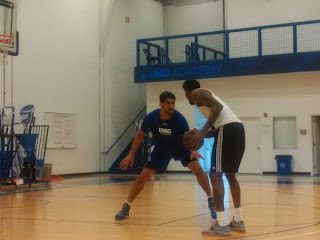 "My grades weren't good enough for college," Bhullar told me, "I was asked by many people why I'm bypassing college, but the grades were a challenge. I could barely even speak English when I first came here. [His English is much more proficient now] I'm sure that if I had started earlier, I would've made it to college here."

Despite the academic setback, Bhamara is confident that he will be ready for the elite challenge that the NBA will bring.

"I've improved my speed, running up and down the court, and my shooting and post-play have both improved a bit," he said, "I've learnt how to react to different situations in the court, 24-second situations, 10-second situations, all types of tense situations. My coaches have told me that I'm ready for the NBA. In High School games here, I get guarded by three defenders each time, but in the NBA, I will be single-guarded because my outside shooters will be better. You can't leave them open, and one-one-one, I can work the man who's guarding me and have the power to go past him."

Around this time a year ago, Sim Bhullar - who played two years of NCAA D1 college basketball for New Mexico State - also declared for the NBA draft, before going undrafted, playing in the Summer League for the Kings, and eventually, heading to the NBA's Development League (NBDL). Bhamara is adamant that, if his NBA gamble doesn't work out, he will stay in the USA to continue striving for a shot at the top level of the game.

"If NBA team doesn't work out, I hope to try with the D-League, and then try for the NBA again," he said, "I want to try here in USA: this is where the level of basketball is the highest. I'm familiar with it. If I try to go play basketball in a league in another foreign country, I'll have to learn another language and get suited to another lifestyle, and it may get complicated." 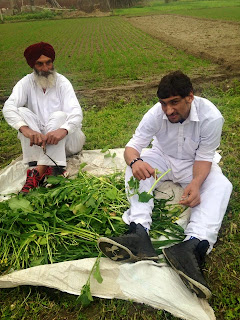 Ultimately, Bhamara hopes to inspire others from India - especially those from far-out parts of the country outside of mainstream reach - to explore their NBA dreams, too.

"I want 10 more players to come out of India after me," he said, "I don't want to be the only one to be there. I want to work it out there and prove myself so that 10 more will come, and 20 more after that. I want to open a road in India for basketball. I'm from a small village, there could be others like me in small villages or towns in India who can dream of playing in the NBA."

I asked him if he had told his parents the news of his NBA declaration yet.

"They will only get the good news when I make it to the NBA!"

Ambitious words from a talent young man - but does he have enough to challenge the best and brightest basketball players in the world? Bhamara is currently not high in the picture of this coming summer's top draft prospects (the respected website DraftExpress.com ranks him at 94th) but he could change all that if he can impress scouts at the pre-draft workouts. Thamel added in his report that Bhamara has managed to stay injury free this past year and has shown improvements in shooting with both hands, being a reliable free throw shooter, and acting as a defensive presence. His weaknesses are his agility and lateral movement, writes Thamel, things that he can focus on as a professional for the next few years.

There will be hundreds of prospects competing for the same dreams that Bhamara strives for, but few - if any - will have a more intriguing story. At 10, he was farming in a tiny Indian village and told me that he didn't know the difference between basketball and volleyball. At 19, he finds himself working out with NBA teams and fighting for a spot in the world's finest basketball league. Regardless of what happens ahead, he has already improved and achieved beyond his wildest dreams. Indian basketball fans will be wishing that he can keep the momentum going so that he can become the first Indian player in the NBA and become a role model for millions others back home. Hopefully, his parents get to hear some good news, soon!