The NBA All Stars we deserve 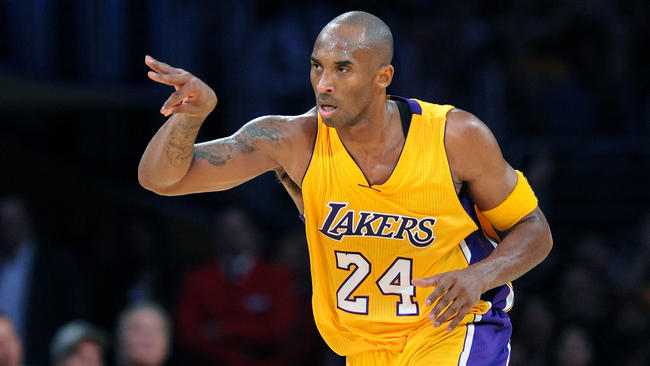 That Kobe Bryant has aged and suffered injuries and is not a good or efficient basketball player anymore. After two decades, he has announced his farewell to the game of basketball, and as the horizon nears to the end of his career, his fans grew more fervent in their idol worship. He doesn't deserve to be an All Star this season. But as the first returns of the fan ballot indicate, he is - unsurprisingly, as one of the most popular players in history - going to be an All Star this season.

Kobe is leading the fan voting so far by a fan margin, far ahead of the NBA's new golden child Stephen Curry and with more votes than LeBron James and Kevin Durant combined. The balance between 'deserving' and 'popular' players has forever been a matter of debate in the fan community, and even though I believe that only the most deserving 12 players per conference should be All Stars, I vote for my favourite players (whether they deserve it or not) when I fill the ballot!

So yes, Kobe Bryant is going to be an All Star this season. But before we accept and embrace that eventuality, let's celebrate the NBA's top players through the first two months of the season and name the players who actually deserve to make the 2016 NBA All Star teams in Toronto.

East
LeBron James is so brilliant that despite being the best player in the East so far, the four-time MVP is being overlooked because of the high standards he has set for himself. His Cavs have the best record in the conference. Paul George bounced back from a terrible leg injury better than ever, and would've been the NBA's most amazing stories had it not been for the Warriors' blistering start. Kyle Lowry has carried the Raptors to the best record in the Atlantic Division and is the unlikely best point guard in the East right now. He will get a lot of home-team love in Toronto. Jimmy Butler is one of the best two-way players in the league as he leads the Bulls in scoring while also being their hardest-working anchor on defense. Andre Drummond is a double-double machine and has racked up 20-20 games this season, too. He currently enjoys a huge lead in the rebounding bracket over the rest of the league.

Don't be shocked that I named Avery Bradley as an All Star. The 16-13 Celtics have played surprisingly well this season, and while Isaiah Thomas has been their team's leading scorer, Bradley has been the team's most consistent performer on both ends of the floor. Carmelo Anthony continues to do what he does for the Knicks, putting up big scoring numbers on a mediocre team. Pau Gasol has been the Bulls' second-best player after Butler and is one of the team's most consistent performers night to night. Dwyane Wade and Chris Bosh have both played at a high level all season and deserve to be All Stars for the surging Heat. The Atlanta Hawks, as usual, are chugging steadily along, and their points/rebounds leader Paul Millsap has been the team's best player. Kemba Walker has enjoyed a fantastic breakout year so far for the Hornets and should become an All Star for the first time in his career.

West
Most of the West starters are no-brainers. Stephen Curry is a basketball supernova right now, the best player on planet Earth, and the MVP favourite by a wide margin. Kawhi Leonard has been absolutely brilliant as well, and second only to Curry as my MVP favourite this season. He's scoring a team and career high in points and is the reigning DPOY might be a DPOY favourite again. Russell Westbrook and Kevin Durant have carried the Thunder mostly on their exceptional talent alone, and take turns from night to night alternating as the MVP favourites of their own team. While the Clippers have been a little slower out the gates this year, Blake Griffin hasn't skipped a beat, and has shown the ability to be unstoppable offensively on most nights.

Despite the Rockets' slow start, they have found some semblance of form of late on the back of James Harden, who continues to pour in MVP-type numbers on the offensive end. Ditto can be said about DeMarcus Cousins who has performed exceptionally well for a Sacramento team that started slow but has improved a little off late, especially when he is on the floor. Dirk Nowitzki refuses to age, climbing up to sixth in the NBA's All Time scoring records while his Mavericks continue to be a pleasant surprise early in the season. Draymond Green may be one of the most important players in the NBA, an elite defender capable of guarding all five positions in the league, the assists leader of his own team, and a player capable of putting up double-doubles on a regular basis. Green keeps the stellar Warriors chugging along, and his teammate Klay Thompson has pushed his own form to the elite level in recent weeks to be considered for All Star status again. Chris Paul is slightly slower but still one of the best PGs in the NBA for the Clippers, while LaMarcus Aldridge continues to become a better fit for the 25-6 Spurs game after game in the post. 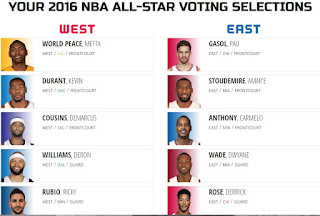 Well, the lists above are the players who I feel have performed at either a) the highest level, b) at a high level for the best teams or c) both. But when I fill my own fan ballot, I don't necessarily vote for the starters as mentioned above. Once again, I have continued my tradition of voting for players best on bias and favouritism instead of talent and value. Here is how I've filled out my own All Star ballots:

Don't ask me for an explanation; these are my favourite players - you can have your own!