Supreme Courts: No Sleep in Nagpada


This feature was first published in my column for Ekalavyas on November 6, 2015. Click here to read the original article. 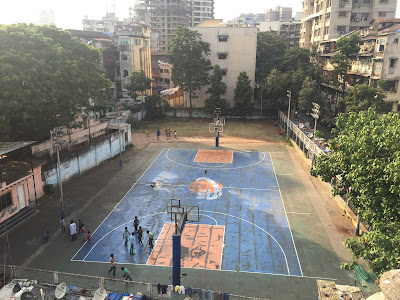 The gates to the Late Bachookhan Municipal Playground in Nagpada remain closed – bolted and locked – when a sputter of half dozen children of all shapes and sizes show up outside. It’s still only 5:15 PM and the court isn’t destined to be opened till 5:30. While they wait, the children talk smack to each other in a mixture of Hindi, Marathi, and local Mumbai slang, goats and chicken excuse themselves and wade their way across the road, the sounds of bouncing basketball are only overshadowed by honking cars on the main road, and the smell of some of the best kebabs in the city floats across the thick air.

Minutes before the most storied basketball court in Mumbai – and perhaps, one of the most famous courts in all of India – opens up for another evening of hoops, the entire neighbourhood seems to descend around its four walls. They come from high-risers, they come from chawls, and they come from slums, but all together, they come for their united love for basketball.

Apart from being the country’s financial capital, Mumbai is one of India’s most passionate basketball cities. In the Maximum City, basketball truly never stops all year round. Top national championships like the Ramu Memorial Basketball Tournament (RMBT) and the Savio Cup hit the city every spring with a bang. Invitational tournaments in Andheri, Bandra, Ghatkopar, and more dot the city’s basketball landscape. Whenever there is a major grassroots basketball event in India – like the Reliance Foundation Jr. NBA programme, NBA Jam, the discontinued NBA Mahindra Challenge, BFI/Reliance School/College leagues, or visits from NBA superstars – Mumbai is always among the first city’s on the itinerary. Bollywood is nearby, and celebrities like Abhishek Bachchan, Neetu Chandra, and more get into the act around the city to promote the game, too. Strong pick-up games can be found in playgrounds around the city, from Mastan to Andheri and Bandra to Dadar, and more. When the NBA opened its official India office, it chose Mumbai as its host.

But Mumbai – like its ‘maximum’ nickname – is a city that goes further than you think it does, and then a little more. Dig a little deeper into the city, away from the posh South Mumbai neighbourhoods, the high-risers, the hustle and bustle of capitalism, the jam-packed local trains, the celebrity homes, and the scores of humans that live in the popular residential neighbourhoods in the North or the suburbs, and you’ll find Nagpada. And in this region – little known to many in the city – you’ll find more passion for basketball than almost anywhere else in the country.

Wading through the thin streets of this neighbourhood, you are faced with a zoo of animals, an apothecary of different scents both delightful and disgusting, mounds of trash, mouth-watering restaurants, hordes of passing crowds, and a myriad of colours and culture. But the last thing you expect to find here is a basketball court. And yet, there stands the Bachookhan Municipal Playground, hope to the Nagpada Basketball Association (with the swagger-rific acronym of NBA), the birthing place of some of India’s finest basketball players, host to many of Mumbai’s top basketball tournaments, and a safe haven from the chaos outside.

Nagpada today primarily is home to the city’s Muslim population in its various chawls around the court. It was in the 50s that American missionaries introduced basketball to the city and to the locals in this neighbourhood, and the foundation stone for this court were laid a decade later. Soon, the court became the heartbeat of the mohalla, and while the rest of the country swayed towards other sports, Nagpada’s biggest icons were its basketball players.

Over the years, Nagpada’s storied court produced many great players, such as former India captain and Arjuna Award winner Abbas Moontasir, Afzal Khan, and eight Chhatrapati Award winners. Noor Khan, the Secretary of the NBA, further told me that there have been a total of 22 India internationals and more than a hundred players who have played at the national level to have honed their game at this court.

The court received several major facelifts in the 70s and then in the ensuing decades, most recently by its namesake NBA (America’s National Basketball Association) in 2007, who revamped the ground with a fresh rubber turf.

Khan said that many All India tournaments have been hosted in Nagpada over the years, and in the current day, the court hosts the Nagpada Invitational Tournament. Celebrities of the big and small screen are known to make regular visits, too. On big nights – when there are major tournaments, national-level players, or rivalry games against the Mastan players nearby – thousands of fans rush in to provide the most electric and unique atmosphere you’ll find at any basketball event in India.

In the past, the court and the neighbourhood also gained notoriety for being a home to some of India’s underworld criminals, such as Dawood Ibrahim, Chhota Shakeel, Aalam Zeb, Ahmed Kashmiri, Asif Baatla, and more. For decades, the little neighbourhood played host to mafia activities, street fights, shootouts, and police encounters. In an interview with Mid Day, basketball legend Moontasir mentioned that even the gangsters were united into neighbourhood activities through basketball and didn’t act to harm the mohalla or its favourite sport. 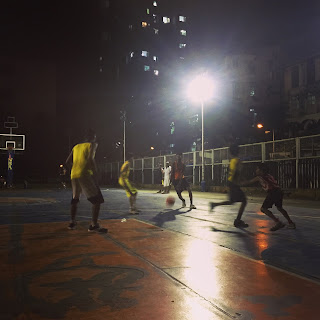 In recent years, however, a different type of problem has afflicted the basketball activities at the court: many individuals have moved into jhoparpattis, or slums, around the court, and NBA secretary Khan claimed that the court’s attendance and attraction has taken a hit due to them. This is a two-fold problem: the local government authorities haven’t done enough to provide social security or alternative living options to the poorest members of our society, and now, they aren’t acting to assist the community who are complaining against it, either.

Sharp at 5:30, the gate is opened by a woman who lives – ironically – in a jhoparpatti, and children storm inside eager to get their first shots up for the day. The children are from high-risers in Nagpada, from the chawls, and from the slums, too, and they all know the language and rules of basketball. Social structures are broken and basketball fundamentals temporarily provide a refreshing even ground.

Earlier in the evening, the ‘mini’ level talent – kids under 14 – play games among each other and then are coached by seniors who play in the same court. They play with extreme enthusiasm and a sharp sense of the game, instilled early in their lives through regular clashes on court. The ‘minis’ are followed by the youth players, many of whom have dreams that the game will be a way out to find financial stability through a government job one day. The senior team rolls in last with their eye-catching basketball gifts and athleticism. The court has made them into great players, and they keep slogging here every day to continue to get better.

Across the road from Nagpada, less than a two minute walk away from the Bachookhan Ground, is the Mastan neighbourhood, and their own famous Mastan YMCA court. This is a larger, better maintained space, and because of the close vicinity of the two basketball communities, a heated rivalry has grown between teams of the two courts over several decades. In interviews with many old and young players, I was told that the rivalry started in the 60s and 70s and still continues – though not as feverishly as before – into present day. Once the game finishes however, the off-court friendships of the two neighbourhoods thaw out the icy relations of the game.

Until recently, the Bachookhan Ground was known to encourage participation of several excellent girls’ teams, too, who competed well against the best in the city. In recent years, however, female basketball participation in Nagpada has unfortunately dwindled away. I wasn’t given any clear answers to why this happened: the girls claimed that they wanted to play but the community elders frowned upon them, NBA officials said that many parents didn’t feel it was appropriate for their daughters to be playing the game, and parents simply pointed the fingers back at the community at large. Whatever the reason, the unfortunate loser has been the growth of girls’ basketball, which could be brimming with potential in Nagpada.

The night grows deeper. It is past dinner time for many and past bedtime for some. Outside the court, the darkness hides hints of menace in its shadows, but none of it seems to effect the basketball community-at-large. The game goes on, unabated. Players sweat, run, shoot, hustle, and sweat some more.

At 11 PM, the Bachhookhan Ground is finally cleared out. Balls stop bouncing and the floodlights are turned off. Despite the fervent requests of the game’s biggest addicts, the gates are locked and bolted and basketball ends for the night.

But even after the court closes, basketball doesn’t sleep. The game haunts the dreams of the players – young and old – who can only think of returning to play the next day again. Because in Nagpada, even when the game stops on court, it remains the heartbeat of this basketball-crazed neighbourhood.

And just before 5:30 PM the next day, a crowd of enthusiastic ballers line up outside the gate again. They cheer, and they holler, and then the gates open for another day of hoops.