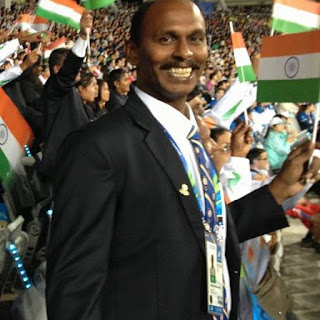 For decades, Coach R L Prasad Guntupalli - known popularly as GLR Prasad - has been a popular face in the Indian basketball circles, from club-level competitions in Bengaluru to advising from the bench as Team India defeated China in Wuhan last year. On Episode 21 of Hoopdarshan, Prasad joins hosts Kaushik Lakshman and Karan Madhok to talk being Scott Flemming's assistant for the Men's National team, coaching India to victory at 2015 SABA Qualifiers, and the growing basketball scene in Karnataka. Additionally, Kaushik and Karan talk in great detail about the exciting new NBA season, including the Warriors, Tim Duncan, and Kevin Garnett.

Prasad was the assistant of India's former Head Coach Scott Flemming for two and a half years and is currently coaching the Indian Army team. He regularly works in the school, college, and senior club circuit in Karnataka. In our interview, he discussed Team India's improvement to 8th place the recent FIBA Asia Championship and his hopes for the future of Indian basketball. In the NBA section of our discussion, the Hoopdarshan hosts tackle numerous topics, like rooting for Stephen Curry, our growing Kawhi Leonard mancrushes, the Rockets impatient firing of Kevin McHale, and why Tim Duncan is like a glass of pure Himalayan water.