Several of the top club teams in India headed down south to Chennai to take part in the fifth installment of the Jeppiaar Trophy All India Invitational Tournament, a championship that brought together 11 teams in the Men's and Women's divisions to the Jeppiaar Institute of Technology (JIT) in the city. After six days of basketball featuring some of the best present and future stars in the country, Income Tax (Men) and repeating title winners Southern Railway (Women) ended the tournament as champions after the final day on Saturday, March 14.

The participating teams at the 2015 Jeppiaar Trophy were: 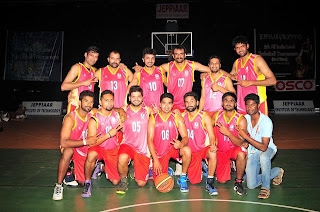 In the Men's final, Income Tax defeated Vijaya Bank 67-59. Income Tax's Vinay Kaushik scored 22 points in the final for his team's victory and was named the Player of the tournament. The Women's tournament was only held in round-robin fashion in the group stage. Southern Railway finished undefeated in the Women's group and were thus named champions, with South Central Railway and South Eastern Railway finishing second and third respectively.

The last iteration of this tournament was held back in 2013, with IOB (Men) and Southern Railway (Women) emerging as winners.

Before the tournament, JIT created a preview video about the tournament and the Men's and Women's home teams. You can check it out here.
Posted by KARAN MADHOK at 12:27