File this bit of news in the 'Random' shelf. Bengaluru's Jain University's four-day sports festival - VIE 2015 - will come to a conclusion today. For the last few days, the festival has welcome over 900 participants from 40 colleges all over India and 2 colleges from Sri Lanka in Cricket, Basketball, Table Tennis, Badminton, and Volley Ball events. At the closing ceremony of the festival on Wednesday, March 11, VIE will also welcome a former NBA player: Shandon Anderson. 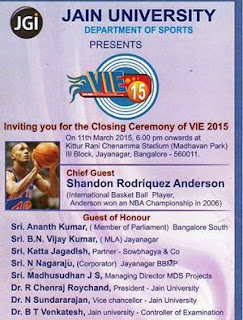 It is unclear how Anderson, who retired in 2006 after being part of Miami's championship-winning squad, networked his way to Bengaluru with Jain University, but he's said to be in the city this evening as a chief guest for the festival's conclusion. Following the well-patented custom of all chief guests at every Indian sporting event, I'm predicting that Anderson will be involved in making speeches, shaking hands with players in the middle of the court, sitting on a sofa court-side, and enjoying copious iterations of chai.

Anderson played in the NBA for a decade after becoming the 54th pick by the Utah Jazz in 1996. He played for the Jazz, Rockets, Knicks, and finally, the Heat, where he played limited backup minutes to the Dwyane Wade / Shaquille O'Neal led championship team. His best season was in 1999–2000, when he averaged 12.3 points per game with the Rockets. His career average is 7.8 points per game.

Fans in Bengaluru who want to catch a glimpse of the former NBAer should head to the Kittur Rani Chenamma Stadium in Jayanagar from 6 PM today. Guests of honour at the event will also include Bengaluru South Member of Parliament Ananth Kumar, Jayanagar MLA BN Vijay Kumar, and more.