For the past three and a half months, 3x3 basketball events have been brewing across the country, pitting the most competitive college teams against each other at the NBA Jam. After a record 16 cities 'jamming' with the NBA and basketball, the finals of the 2014 NBA Jam - the biggest iteration of NBA India's annual college basketball and youth festival - came to a conclusion with the national finals in Pune on December 7. The winning teams from each city eliminated each other before two champions in the men's and women's division stood at the top of the podium on Sunday at Pune's Ness Wadia College. 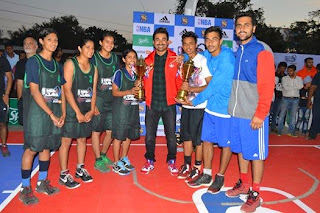 The National Finals were held in Pune with winners from each city form December 5-7. Punjab Warriors (Boys) and Pune Ballers (Girls) were crowned the national champions. Indian VJ/actor and basketball fan Raanvinjay Singha was present to witness the finals and award the winning teams.

NBA Jam, organized by NBA India, was powered by Jabong and held in partnership with Sony SIX. One of the highlights of the NBA Jam was a guest appearance by three-time former NBA champ Bruce Bowen, who visited the tournament's iterations in Kolkata and Chandigarh last month.
Posted by KARAN MADHOK at 01:37