Don't equate India's lack of international basketball success to a lack of potential talent: As some of the top late-bloomers in India have shown, it wasn't their talent which was lacking, it was only their timing. To create a revolution in Indian basketball and produce world-beaters from our country, we have to focus on identifying and training the players with the best upside as early as possible. For about a week in Nashik (Maharashtra), fans will get a chance to see the work put in to hone the craft of the youngest members of the Indian hoops fraternity. The Sub-Junior (Under-14) nationals is the youngest national-level basketball tournament in the country: From November 22-28, Nashik is hosting the 41st Sub-Jr National Basketball Championship for Boys and Girls. 27 boys' teams and 25 girls' teams gathered for tip off at the Meenathai Thakrey Stadium on Saturday.

The onus will be on Chhattisgarh - champions in both the boys' and girls' divisions at this tournament last year in Patna - to continue their dominating performances this year, too. Chhattisgarh's girls have won every Sub-Jr title since 2002 (12 in a row!), and last year, their boys' team joined in the celebrations, too. Madhya Pradesh will be another team to watch in both divisions while Tamil Nadu (Girls) and Rajasthan (Boys) have enjoyed stellar performances in this competition in the recent past. Hosts Maharashtra will be out to defend their home court, while this tournament will also mark the debut of Telengana - India's newest state born out of northern Andhra Pradesh - at the national basketball level as an independent team. 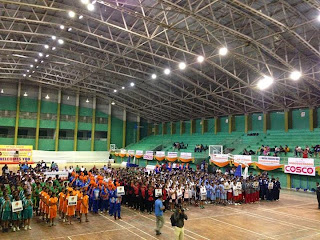 The tournament is being organized by the Basketball Federation of India (BFI) and IMG Reliance in partnership with the Maharashtra Basketball Association.

Chhattisgarh's Boys team opened up their title defense in style on Saturday, taking a 11-point lead at halftime up to a convincing 75-57 victory over the tough Andhra Pradesh squad. Salim Ali was impressive for Chhattisgarh with 27 points in the win. In a battle of the silver and bronze medalists from 2013, Madhya Pradesh used a scintillating fourth quarter to turn a close game into a blowout victory against Rajasthan. Harshwarohan Tomar had 21 for MP, who won 60-40 after a 16-4 run in the final period of the game.

In a girls' contest of two strong neighbouring southern states, Kerala used tough defense to see off Karnataka 49-27. Sreekala R led the way for Kerala with 23 points in the win, nearly single-handedly equaling the total of her opponents. In their first game as an independent state, Telengana Girls maintained a steady lead over Rajasthan en route to a 50-31 win.

Boys
Girls
The finals of the tournament are scheduled to be held on Friday, November 28.