Semi-Pros: Despite having no professional basketball players, Team India are earning respect at FIBA Asia Cup


Yadwinder Singh, the most experienced current member of the Indian National Basketball team, has been travelling abroad for international tours with the squad for 12 years. And yet, despite some highlights in the past, he had never quite experienced something like this before. India had just defeated Asian powerhouses China in a game considered to be India's greatest basketball victory in history. A day later, they had easily blown out Indonesia to secure a spot in the Quarter-Finals of the 5th FIBA Asia Cup in Wuhan, China. 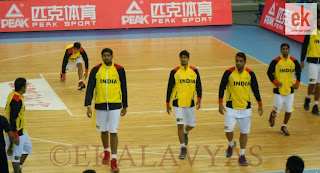 "We are starting to feel like a real team," Yadwinder said, "It feels great when we get into an elevator, and strangers see us and congratulate us. Now they know who we are. They know we are Team India"

India have won two and lost two games at the tournament so far, a record that sounds less flattering than it truly is. India's first victory came against China, the best team in the continent whom India had never defeated before. Their second loss was to Iran, Asian champions, who were made to sweat and stumble against the persistent Indians after amazingly, finding themselves down at halftime. On the court, India may have only had two victories; but off of it, they are winning fans, respect, media attention, and adoration.

And the primary reason for this growing attention on Team India's success has been that Head Coach Scott Flemming has made this team into a feared competitor, despite having any talents in his roster holding on to a professional contract. All of India's finest players, including Amjyot Singh, Vishesh Bhriguvanshi, Amrit Pal Singh, Pratham Singh, and more, are semi-professionals, holding various other day jobs back home in India and only participating in basketball tournaments to represent their state or the government that they work for. There is no professional league in India and none of these players has ever been paid to play basketball abroad. When they're not playing basketball, India's best players can be found employed employed on sports quotas with government agencies like the Railways, armed forces, public sector companies like ONGC and BSNL, or nationalized banks such as Indian Overseas Bank and Vijaya Bank, a trend that Gopalakrishnan R. went in greater depth writing about on his feature for Fountain Ink magazine earlier this year. 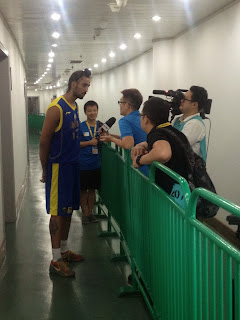 All of this is common knowledge to the average Indian basketball fan; but the media in attendance at Wuhan and fans across Asia closely following this tournament have expressed disbelief and pleasant delight over this bit of news. What's more, unlike many other Asian teams, India doesn't have a single 'naturalized' foreign player on their roster: every single one of these twelve 'Young Cagers' was born, bred, and learnt to dribble the basketball - for better or worse - in India. Naturalization in basketball is a race that may be leaving India far behind, and a lot of followers of the team - including the coach - believe that allowing interested NRI players into the national system may be an important step forward.

The surprising thing - which also saddens me a bit - is that this team has already received more mainstream media coverage in China than it probably ever would back home. A few days ago, China's national and most prominent sports channel CCTV covered India's rising profile and tried to comprehend how a team of semi-professionals could defeat China's team of young rising stars.

On their loss to India, China could (and many have) use the excuse that the team they sent to the FIBA Asia Cup was a younger squad, but even all these young players will be making big money and having prominent roles in the Chinese Basketball Association (CBA) from the coming season. And in this very tournament, this same Chinese team has defeated Iran (Asian champions at their best) and Japan. All three of these teams, whom India also played, are full of professional players who play in leagues either in their respective countries or abroad - like Iran's Hamed Haddadi who has played in the NBA or Japan's Takumi Ishizaki, who plays in Germany. India's quarter final today will be against Philippines, featuring players all in the PBA and the naturalized American Marcus Douthit who was drafted into the NBA ten years ago. 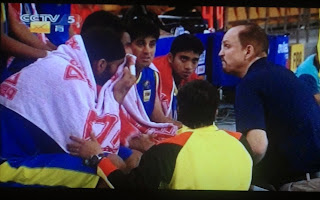 If Indian players can give a good fight to these professionals, why can't they play at a professional level themselves? Amjyot Singh should be good enough to play in the CBA, and should definitely dominate any of the smaller pro leagues in the continent. The likes of Amrit Pal Singh and Vishesh Bhriguvanshi have a shot, too.

And there are many other youngsters waiting in the wings. But the problem is that, in most Asian professional leagues, there is a cap on the number of foreign players any team can have - a cap on both Asian foreigners and those outside the continent. That is why most teams in China, Japan, Philippines, or elsewhere spend their foreigner slot on North American or European players and pick more talented Asian individuals for their 'other Asian' slot. Only the cream of the crop Indians will be recruited professionally by these leagues, and it has only happened to our women players so far, like Geethu Anna Jose and Anitha Paul Durai.

Unfortunately, many of our top men players will have to wait for Indian to launch a professional league of their own, something that I have argued in the past will completely revolutionize the sport in India over the long run. The onus is already on the Basketball Federation of India (BFI) and IMG-Reliance to launch this league, hopefully as soon as next year. Only then will our top players not have to hold faux-office jobs with the railways or with banks and focus on basketball alone. Only then will they get to play quality basketball games all year, games that actually hold some meaning and value, instead of small tournaments where they face the same talent, or lack of talent, and rarely grow as players. 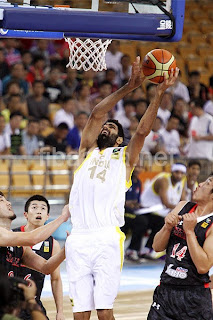 India's improved performances are a perfect underdog story, but they shouldn't be. India have the population, the space, and enough wealth to take bigger strides in the sport than we have taken so far. The fact that our players have been successful despite being professional should be celebrated, but the fact that it's 2014 and we can still not provide a professional platform for the same players is a shame.

Cinderella Stories, such as Team India's performances here at Wuhan, usually come to an abrupt end. But through a better basketball future for our top players, let's hope that moments like these don't remain a surprise, but become the norm. And the next time our players are recognized for being members of 'Team India', it is by strangers back home in India itself.