Sim Bhullar declares! Will he become the first Indian-origin player in the NBA?


One step closer, y'all! 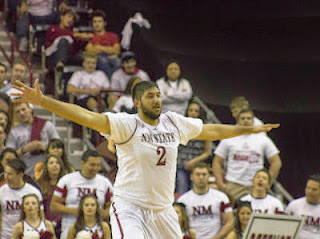 Yes, the rumours which have been flying around for the past 10 days are now true and confirmed. According to New Mexico State, 7-foot-5 sophomore Sim Bhullar, born in Canada to parents from India, has officially declared for the 2014 NBA draft, foregoing his two remaining years of college eligibility. If he is drafted by an NBA team on June 26, 2014, Bhullar could become the first player of Indian-origin in history to have a place on an NBA roster.

Sim Bhullar is a big young man; this news is bigger.

You probably already know Bhullar's story by now: The 21-year-old giant was born in Toronto to parents who had immigrated from Amritsar, India. Sim and his younger brother Tanveer (also a giant) grew up and didn't stop growing. They made a name for themselves at the Kiski School in Pennsylvania, at the Huntington Prep School in West Virginia, and one by one, both joined New Mexico State to play for the Aggies in NCAA Division 1. Sim was named the 2013 and 2014 Western Athletic Conference (WAC) Tournament MVP and led the league in blocks (3.37 per game) and shooting percentage (64.8). Last year, he had a major breakout, capturing the imaginations of fans domestic and across the oceans. He helped the Aggies reach the NCAA tournament both years and finished this season with averages of 10.2 points and 7.2 rebounds. His team had a 50-21 record over the past two years for a 70.4 winning percentage. 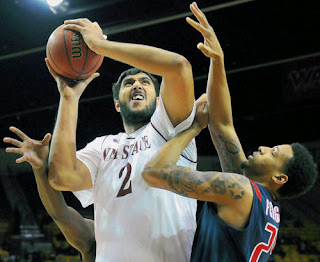 "I have always dreamed of playing professional basketball and I have decided to officially pursue this by entering my name into the NBA Draft," said Bhullar. "I want to thank my family, friends, coaches, and teammates for all their support during this decision making process. Most importantly I want to thank all the Aggie fans who have followed and cheered us on. The support and love I received here has made my time in Las Cruces an amazing college experience. Aggie Up."

Now that he has declared, Bhullar has a real chance of becoming the first to cross a threshold never crossed yet in the world's greatest basketball league. Indians (or South Asians in general) - despite our massive diaspora across the planet - haven't exactly turned the basketball world on fire. Despite the big numbers, Indians are generally underrepresented at the highest levels of the game (here is a short short-list of every Indian-origin player to ever play NCAA D1 basketball) and back home in India, we are still some steps away from having that one international game-changing talent. Bhullar may not be Indian by nationality, but he is Indian by ethnicity; his progress has been followed by the diaspora closely for several years, and a lot of brown-skinned people - from various corners of the world - will be pumping their fists or doing some bhangra if Bhullar's name is called on draft night.

There are some who have questioned Bhullar's declaration, and the reasons for the criticism are understandable. Despite his awesome size, talent, and potential, Bhullar is still an unfinished product. He has barely been in game shape for the NCAA in the last two years, and at this point, he is nowhere close to being in shape to handle the speed of the NBA. Additionally, by declaring now, he will lose the opportunity to play for New Mexico State with younger brother Tanveer. Tanveer was a redshirt freshman last season and thus never suited up for an official game in Aggies colours next to his brother. The combo of 7-5 Sim and 7-3 Tanveer, two big bad Indians dominating everything in sight, would've been pretty awesome. 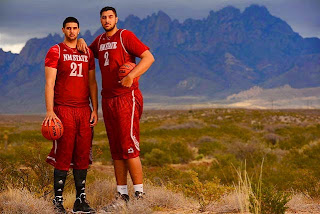 Additionally, another year in college would've improved Sim's game and raised his profile among NBA scouts a little more. Currently, DraftExpress ranks him 96 among prospects, although his declaration may raise his standing significantly. Bhullar and his camp must obviously believe that he can impress NBA scouts at and teams at pre-draft camps enough between now and the end of June to be drafted. Some might say that this decision was made too soon, but if Bhullar believes it's the right time (with his market value on the rise) let's just wait and see if it is.

If I had to predict, I'll probably say that the best-case scenario for Bhullar is that he gets picked late in the second round of the draft, somewhere between 45-60. Every NBA team could use a 7-5 behemoth off the bench to be a monster on the defensive end who creates matchup problems on offense in limited minutes. Additionally, NBA teams could also see the 'Indian' marketing angle, and the potential of reaching out to a whole new set of people never before represented in the league.

You know what would be cool? If somehow, the Kings - the first/only NBA team owned by an Indian (Vivek Ranadive) - somehow get their hands on Bhullar. Ranadive has already been pitching hard for Kings to be 'India's team' and has taken various steps to reach out to the Indian audience. The Kings even featured a shooting shirt with their team name in Hindi for 'Bollywood Night' a few weeks ago. Having an Indian wear a shirt with किंग्स in the front makes perfect sense. Also, can you imagine Bhullar coming off the bench for DeMarcus Cousins? I'm already taking credit '#BoogieBhangra' which is going to break Twitter in a few months.

Anyways, we are obviously hoping that Bhullar not only gets drafted but also enjoys a decent NBA career. Any success for him will influence millions of other Indians playing basketball all around the world, without a role model from their own community at the highest level to look up to. Sim Bhullar could be that role model, and his presence among the world's best basketball players in the NBA will not only break a major barrier but also help encourages those million others to continue believing in their basketball dreams.