'Vallinam', the Tamil movie on basketball, is here!

With the thriving basketball scenery in India's southernmost state, it's no surprise that the country's first mainstream feature film centered around the game has come courtesy of Tamil cinema. Barring a few laughable moments in Bollywood films, basketball and the Indian hoops sub-culture hadn't  made a major crossover into Indian cinema earlier. But now, thanks to director Arivazhagan Venkatachalam, we finally have that breakthrough. 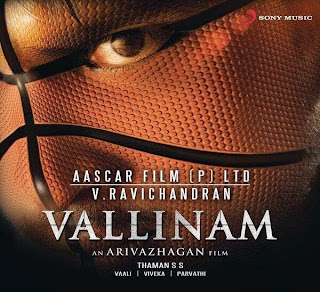 Last month, the Tamil film 'Vallinam' directed by Venkatachalam and produced by Aascar Ravichandran opened to audiences after being delayed for almost a year. The film stars experienced Tamil actor Nakul (previously seen in 'Boys' and 'Baghban' - thanks IMDB) as 'Krishna', a basketball player from Trichy who quits the game after his friend's death and moves to Chennai. Quoting further from IMBD, "due to circumstances mainly due to the villainous cricket captain (Siddharth Jonnalagadda) [Krishna] starts a basketball team in college. How Krishna's determination and fierce dedication to triumph at all cost form the rest of the story. He even wins over the rich heroine (played by Mrudhula Basker) from the villainous cricket captain.

So much to love and analyze here. I first caught whiff of this film in production three years ago, and had all but forgotten about it as the release was delayed to unknown reasons. I am not experienced at all in Tamil, but Wikipedia tells me that the word 'Vallinam' வல்லினம் means 'Hardness' in English (Tamil readers please provide a clearer translation to make it sound less weird). The film opened to positive reviews from both critics and audiences. Apparently, the lead star Nakul very seriously worked on his game to "ensure that he lived the role rather than act."

The 'cricket-as-a-villain' route isn't surprising, since there are indeed a lot of 'alternative' sportsmen and women in India unhappy with the extra attention that cricket receives compared to other sports. I wrote a few years ago that we shouldn't necessarily have to antagonize another sport to promote basketball the right way. 'Vallinam's review on the Times of India (3.5 stars out of 5) does clarify that the film makes "a commendable effort is that it doesn't resort to cricket-bashing to drive home its point". Hindustan Times says that "Vallinam never tries to convince us that basketball is a better game than cricket. It reminds us that cricket is not the only sport that deserves to be celebrated in a country where we have other equally popular sports as well."

One negative review that the film received was from Sify, which said that the film "goes all over trying to fit in mass commercial elements like fight, songs and unnecessary sentiments... The songs and the love angle sticks out like a sore thumb. The director should have concentrated only on the sports element it would have been a far better film". I'm not too well-versed for Tamil cinema, but I guess to reach a wider audience you have to give the people what they want, and that way, make the mainstream audience aware about basketball, too.

Here is the film's trailer:

Form your own judgement as you please.

(I wish I understood Tamil!) 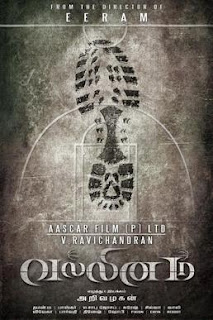 I commend the director and producers for taking a risk of sorts in Indian cinema in making a movie about an alternative sport. Tamil Nadu has a rich basketball tradition and some of India's best players and teams hail from that state. About a week after the film was released, the Tamil Nadu state team returned to the top of country's basketball totem pole when they secured gold at the National Basketball Championship in New Delhi. So of course, the movie has the potential to find a captive audience among hoop fans in TN. Hopefully, if someone releases the film with sub-titles, it can reach audiences across the rest of the nation too, and inspire more interest in Indian basketball.

Bollywood, you're on the clock. Time to step up and kindly erase my memories of Kajol double-dribbling in a sari forever.

Have any of you seen 'Vallinam'? Please offer your reviews and thoughts below.
Posted by KARAN MADHOK at 13:32