In one of the biggest surprises of Indian hoops in the last decade, the dominating Indian Railways Women's side were defeated in a heroic comeback win by Chhattisgarh in the final of the 64th National Basketball Championship for Men and Women in New Delhi on Wednesday, March 5, 2014. Chhattisgarh won the Senior Nationals for the first time ever. Meanwhile, Tamil Nadu's Men's side played some brilliant basketball through the course of the tournament and defeated Punjab to secure gold in the Men's section. The tournament was held from February 26 - March 5 at the Thyagaraj Stadium in Delhi. 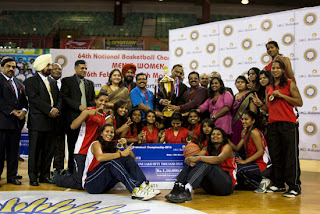 Also known as the Senior Nationals, the championship is India's most prestigious annual domestic basketball tournament and features India's finest Men and Women players representing their states or units. The championship, organized by the Basketball Federation of India (BFI) and IMG Reliance in conjunction with the Delhi Basketball Association (DBA) this year, also served as a scouting ground to select India's national basketball squads. A total of 51 teams combined in the Men's and Women's divisions from all across India participated in the nationals.

Chhattisgarh finally put an end to the 10-year domination by Indian Railways over Women's basketball in the country, notching a comeback in the fourth quarter of the final to defeat their opponents 81-77 and winning gold. It would've been the shock of the decade... if it didn't already seem a little predestined. For the past decade, there seemed to be no answers for the Indian Railways team that always managed to pick up India's brightest talents and, of late, surround them around the prodigious talents of Geethu Anna Jose. But Chhattisgarh, under visionary coach Rajesh Patel, had been giving a scare to the established order at various levels of the game in recent years, and were finally able to convert their potential into success at the highest stage.

Chhattisgarh's Kavita Kumari, who had 25 points and 13 rebounds in the final, was the star of the show, dominating inside and out to help her team bounce back after trailing in all three quarters. Chhattisgarh were down 65-60 at the start of the final period, but they were able to pace past Railways in the final period and hold on for the victory. For the first time in 10 years, there was an answer for Geethu Anna Jose, who was held to 17 points in the final. For Chhattisgarh, another rising star Sharanjeet Kaur added 20 points while Bharti Netam had 16. 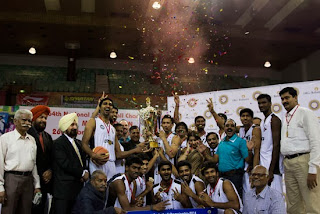 The Men's final evoked a comeback of sorts too, a promise of a comeback of a late 90s/early 00s dynasty of Tamil Nadu that won five consecutive nationals. After a decade without the gold, TN finally charted their way to the top again by playing smart defense against the physical Punjab side. TN trailed by four points in the first quarter, but took the advantage in a commanding second period and held on for a 74-57 victory. Rikin Pethani and Pratham Singh, who had been TN's strongest players all tournament, led their squad with 22 and 18 points respectively in the final.

It was the third consecutive finals appearance for Punjab, but for the second straight year, they had to settle for a silver medal. Punjab's young big man Palpreet Singh, who had enjoyed a breakout tournament so far, scored 19 points in the finals loss.

Tamil Nadu's Rikin Pethani and Chhattisgarh's Kavita Kumari were given the Harish Sharma Most Valuable Player trophies at the end of the tournament, an award named in honour of the BFI's former CEO who passed away two years ago. 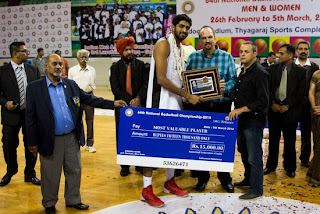 Earlier on Wednesday, the battles for the bronze medal for Men and Women were also held. Gopal Ram scored 16 points to lead Services to a rout over last year's champs Uttarakhand in the Men's game.

In the Women's matchup, hosts Delhi took away a consolation prize as they outlasted Maharashtra for a 79-66 victory. Delhi's Prashanti Singh had a team-high 22 points, while Shireen Limaye (22) and Krittika Divadkar (18) led the way for the losing side.

For each division, the winner took home 1 lakh rupees, while the first and second runners-up received Rs 75,000 and Rs 50,000 respectively. 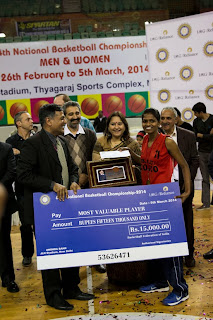 A day earlier, Delhi's Women's side had been defeated by eternal rivals Indian Railways in the first semi-final, as Geethu Anna Jose scored 27 points in the 100-65 blowout. After a high-scoring first half, Railways held Delhi to just 23 points in the third and fourth periods combined. Anju Lakra and M. Pushpa had 19 points each for Indian Railways. Prashanti Singh had 17 for Delhi. In the second game, MVP Kavita Kumari scored 20 points and Deepa added 16 as Chhattisgarh defeated Maharashtra 75-65. Shireen Limaye had 20 for Maharashtra.

The first Men's semi-final was a rematch of the 2013 Finals as Punjab got their revenge over Uttarakhand with a 80-68 win. Palpreet Singh and Ranbir Singh each had 27 for Punjab, who bounced back from a five-point third quarter deficit to shut down Uttarkhand in the final quarter. Yadwinder Singh led Uttarakhand with 24 as the past holders were denied a chance to repeat this year. For Uttarakhand, star talent Vishesh Bhriguvanshi missed the tournament. Pratham Singh scored 28 and SP Venkatesh added 22 to help TN beat Services 92-85 in the second Men's semi-final. Joginder Singh and veteran Jairam scored 18 each for Services.

Earlier in the tournament, former NBA Coach of the Year Del Harris held a 'Train the Trainers' clinic for attending and local coaches and players. 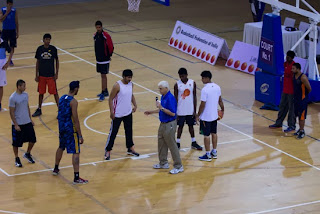 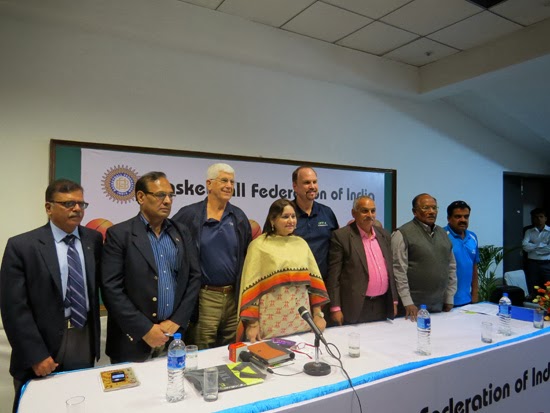