At just 5-foot-3, he was - and still is - the shortest player ever to play in the NBA. And despite the overwhelming odds of being the smallest man in primarily a big guy's game, Muggsy Bogues lasted in the world's most competitive basketball league for 14 years, most of them as a stable starting point guard. From his rough childhood to his unlikely NBA success, Bogues is the ultimate underdog story. Over a decade after his retirement from the game, Bogues continues to be an inspiration for others of the power of self-belief. Earlier This month, he made his second trip to India to preach the gospel of hoops. 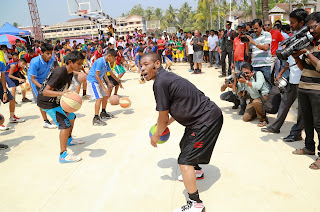 Bogues was invited officially to assist with the first season of the Reliance Foundation Jr. NBA programme, and he visited Mumbai and Kochi in the first week of February to train the hundreds of players and coaches involved in the events.

"I'm here to teach kids the game of basketball in schools and hopefully get them interested in the game at a young age," he told the Times of India, "The most important message I look to share is how important it is for youth to be active and healthy."

Bogues visit included attending the finals of Kerala's first Reliance Foundation Jr. City Championship in Kochi, where he trained the kids and gave out awards. He thrilled the kids with an exhibition of various basketball skills, including ball-handling, shooting and defending techniques.

Of course, Bogues' calling card for his career and after has always been his height, or lack thereof. So when asked how he managed to enjoy a long career with the height disadvantage, he flipped the script. "In fact, I thought of it as an advantage," he told The Hindu, "No one knows, how big your potential is, how big your heart is. When you start dreaming, you start winning."

To Mid-Day, he added that the qualities of teamwork and sportsmanship are more important than being tall in basketball. He used his own example to motivate kids in India who might be too short, too unskilled, too poor, or too far away from basketball opportunities in other countries. "There can definitely be an Indian player in the NBA some time soon," he added in the Mid-Day interview, "I mean never say never. I'm living testimony of it. Even though India is not known for tall athletes, don't get discouraged with that. Great things come in small packages." 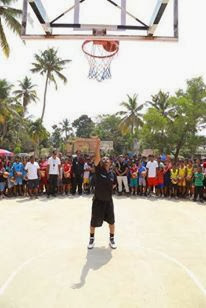 In his NBA career, Bogues played with years with the Washington Bullets, Charlotte Hornets (he's still their franchise All Time leader in minutes played, assists, and steals), Golden State Warriors, and Toronto Raptors. He averaged around 11 points and 10 assists in his prime years. He briefly coached WNBA's Charlotte Sting and currently coaches the United Faith Christian Academy. And he had a monumental role in Space Jam. For all intents and purposes, Bogues went out and proved that size and circumstance shouldn't hold back one from achieving their dreams.

And to young Indians who interacted with him, Bogues' visit once more proved that no matter how small, underprivileged, or how far you may be from your goals, nothing can stop you from dreaming big.
Posted by KARAN MADHOK at 14:09