The race to fight for India's most prestigious basketball trophy - the National Basketball Championship - got underway in its 64th iteration at the Thyagaraj Stadium in the capital city of New Delhi from Wednesday, February 26th. The eight-day tournament is set to feature 51 total state/unit teams from across India. On the opening day, defending champions Uttarakhand (Men) and Indian Railways (Women) both started their campaigns with decisive wins. 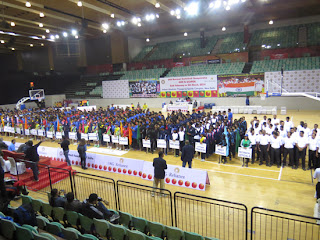 The All India 64th National Basketball Championship for Men and Women is being organized by the Basketball Federation of India (BFI) in conjunction with the Delhi Basketball Association (DBA) and support from IMG-Reliance. At the opening ceremony on Friday, Ajit Mohan Saran, the Secretary of Sports for India's Ministry of Sport and Youth Affairs, was the chief guest. Neeraj Kansal (Secretary of the Sports Authority of India) and Del Harris (former NBA Coach of the Year) were also present as special guests.

Uttarakhand, the tournament's reigning champs from last year in Ludhiana and featuring some of the best men stars in Indian basketball, opened their title defense with a closely contested victory against Indian Railways. After falling behind by six points at the end of the third quarter, Uttarakhand came charging back with a 29-17 run in the final period to outlast their opponents 68-62. Rising Indian big man Amrit Pal Singh led the way with 25 points for Uttarakhand while experienced guard Riyazuddin added 16. Gagandeep Singh scored 20 to pace Railways.

Last year's Men's finalists Punjab also started off the tournament with championship intentions and put on a fantastic, balanced display to overwhelm Andhra Pradesh en route to a 92-44 win. Punjab started the game on a 27-4 run and never looked back. 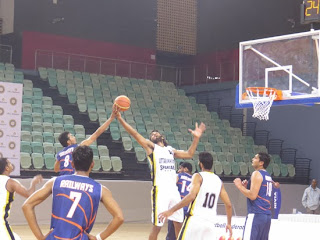 Indian Railways women have won the last six National Championships. They continued their form in their first game, capitalizing on a relatively inexperienced West Bengal side early and cruising to a 68-40 win.

Meanwhile, last year's Women's finalists Tamil Nadu crushed Maharashtra, starting the game on a 22-2 first quarter advantage and keeping their opponents under seven points in every quarter there-after. The unstoppable Appoorva Muralinath had 26 points for TN, outscoring Maharashtra all by herself. TN defeated Maharashtra 63-20. 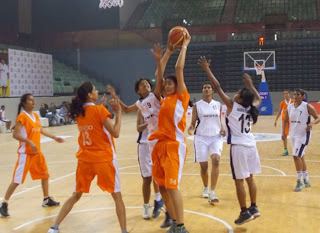 Women
You can find a daily updates of results from the tournament here.

As mentioned above, former NBA Coach of the Year Del Harris is a special guest at the tournament. Along with India's National Senior Men's team coach Scott Flemming, Harris hosted a training session for attending coaches and players at the Thyagaraj Stadium on Thursday, February 27th.
Posted by KARAN MADHOK at 12:29