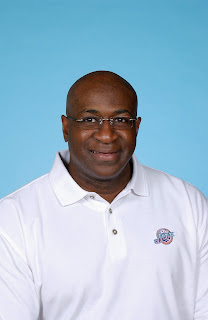 The Head Coach of India's Senior Men's Basketball team Kenny Natt was invited as a special guest to the Sathyabama University in Chennai during the closing ceremony of the South Zone Inter-University Tournament for Men hosted by the institute. The university's chancellor Remibai Jeppiaar, coaches, student-athletes, and other students of the institute were present during the ceremony.

Natt spoke to the students about the importance of academic achievement first, touching on the topic of education (building life-long foundations), developing character and other life skills, and disciplined dedication, both on and off the basketball court. He told young basketball players about 'coachable traits' and accountability, both as players and as young men.

Natt also told the youngsters about his own accomplishments: the American has been a former NBA player, an assistant coach in the NBA with the Utah Jazz, Cleveland Cavaliers, and the Sacramento Kings, and briefly, a NBA head coach with the Kings. Since last year he has been a member of the Basketball Federation of India (BFI) leading India's Senior Men's squad into international tournaments.

"I’m extremely grateful for having had this opportunity," said Kenny Natt on being invited as the chief guest at the event, "I will certainly look forward to returning to next year’s south zone event, in addition to attending events held in the other zones as well. Considering the young talent that I’ve scouted out so far, I can honestly say that the future of basketball in India will dramatically improve within the next few years to a level that will lift eyebrows both domestically and globally."

"Sooner than later, don’t be surprised when we all will see basketballs bouncing everywhere in cities and country sides throughout India. It will be just a matter of time, and I will be personally gratified to had played a role in its growth process."
Posted by KARAN MADHOK at 11:07