Basketball fans in Lucknow were given a visual treat on Friday evening as the best under-14 teams from around India clashed in the Finals of the 38th Sub-Junior National Basketball Championship for Boys & Girls in the city’s RDSO court. Eight days of exciting hoops action ended in fitting manner as the boys’ final saw Andhra Pradesh and Maharashtra fight neck-no-neck in a classic final, which was finally won by Maharashtra. The Girls’ championship was a repeat of last year’s final between Chhattisgarh and Karnataka, and for the seventh consecutive year, it was Chhattisgarh who emerged as Sub Jr champions. 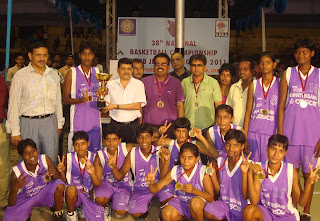 Basketball fans couldn’t have asked for a better final than the face-off between Maharashtra and Andhra Pradesh Boys, two teams with contrasting but effective styles. The teams stayed close throughout: Andhra Pradesh using taking advantage of their length and speed, while Maharashtra relied on their skill and passing. AP had a slim, one point lead at the end of the half, but couldn’t extend on the advantage: neither side was able to go over more than four point of their opponent for the majority of the game.

With the game reaching its last moments, Maharashtra had overturned the score and had a three point lead in the fourth quarter, thanks to their talented guards who penetrated and passed very well all night. AP made some crucial mistakes in the end, and Maharashtra’s Zaid Shaikh pulled out big, level-headed plays to give his side a 61-58 win and the National championship.

“We had practiced very hard for this championship, and came ready to dominate,” said Shaikh, “We had beaten AP in a blowout early in this championship, so we had to be wary of their backlash tonight. Luckily, we were able to play well in the end and win – our team’s strength was our great combination.” 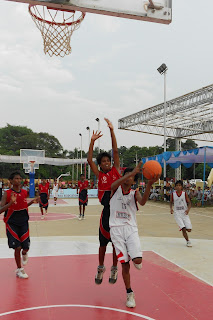 M. Siva Durga of AP led all scorers in the final with 16 points.

The girls’ final was a repeat of last year’s final between Chhattisgarh and Karnataka. Chhattisgarh Girls have been an unstoppable force in the Sub-Junior level, and win another big victory on Friday, won their 10th championship in 11 years. Chhattisgarh, who have been the best team in the competition, were in no mood for a slip-up in the final, as they started strong and refused to slow down against their opponents. Saving their best defensive performance for the finale, Chhattisgarh outscored Karnataka 36-7 in a devastating first half.

Chhattisgarh’s defense focused around stopping Karnataka’s Lopamudra, who had been the best individual player in the girls’ section in the tournament. With Lopa on check, Chhattisgarh were able to cruise in the second half and celebrate their seventh consecutive Sub-Junior national title with a 64-21 victory. Riya Verma led Chhattisgarh in the final with 23 points.

“We are a strong team because we are very united,” said P. Divya, the captain of the Chhattisgarh side, “We were prepared for this team because we had defeated them in the final last year, and in this year’s tournament, we knew that our team was too strong for any opponent.” 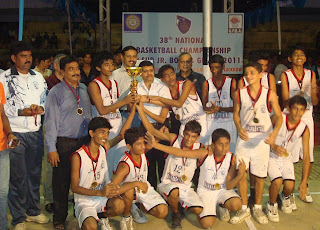 Earlier on Friday, the 3rd/4th place games were held: In the boys’ game, Punjab overcame a slow start against Chhattisgarh to make a strong comeback and win 70-47. Punjab were led by Guksewala (21 points) and Abhi (16). For Chhattisgarh, Mithun, who had scored 46 points in a loss to AP in the semi-final only the previous night, led the scoring charge of his team with 18 points in the 3rd/4th place playoff.

In the girls’ game, Maharashtra played a strong second quarter to overturn the score against Kerala and then race to a 48-37 win to clinch third place. Maharashtra were led by Veera who had 16 points.

Mr. V Ramachandran, the Director-General of RDSO, was the chief guest at the final and handed out the prize-winners trophies. “I was very glad to see the talent on display here and wish to see many of these players representing India one day,” said Ramachandran, “My best wishes go out to all those who took part in this championship. I would also like to thank the Basketball Federation of India (BFI), the Uttar Pradesh Basketball Association (UPBA), and RDSO for conducting this big event. 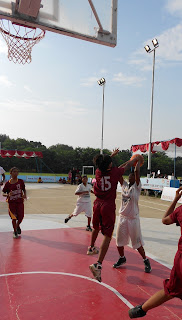 For the first time in the Sub-Junior nationals, individual prizes were given for the Most Promising Players of the tournament. With the award, the individual players were also given a cash prize of Rs. 5000 each. The awards were given to: