Defending champions China were drawn with fellow East Asian team Chinese Taipei, Middle Asia’s India and SEABA’s Malaysia in Group A for the Preliminary Round of the 2nd FIBA Asia U16 Championship to be held in Nha Trang City in Vietnam from Oct 18-28, 2011.

The draw was conducted at the Media Conference Room at the Wuhan Sports Center in Wuhan (China) on Sunday, the final day of the 26th FIBA Asia Championship.

Group B involves Korea, who lost to China in the final of the inaugural FIBA Asia U16 Championship at Johor Bahru (Malaysia) two years ago, along with two WABA teams Iraq and Lebanon and Uzbekistan.

With only 15 teams in fray, Group D will see only three teams and all-SEABA affair – Philippines, Indonesia and Vietnam. 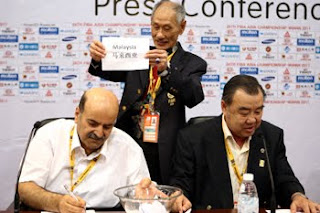 “It is a great significance that we are conducting this draw for the 2nd FIBA Asia U16 Championship on the final day of the 26th FIBA Asia Championship,” said FIBA Asia president Sheikh Saud bin Ali Al-Thani who presided over the draw proceedings.

FIBA Asia will run a special event website http://nhatrang2011.fibaasia.net during the event.

Groupings for the Preliminary Round