My Pre-Season recap, if there's anyone out there to listen...

Please care about the pre-season. Please, pretty please! Look, I even went on NBA.com/India and pleaded its case. It's not not important, okay? 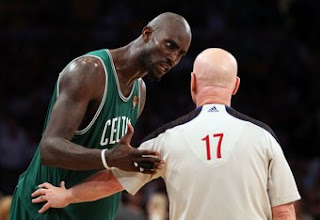 Well, whatever your sentiments may be for the seven or eight exhibition games played by each NBA team before the start of the regular season, you can now hold them until next October. The pre-season has concluded, the real season is only three/four days away, and peace has been restored in the galaxy, somewhat.

The new technical rule: Be careful the next time you pump your fist in excitment or frown at the referee or raise your eyebrow to emulate The Rock. NBA refs have been given a super ridicolous new technical foul rule that will keep most of the NBA's players worried more about their body language than their defensive assignments. A bunch of critics have already emerged against this new rule and we can hope that Commissioner Stern will ease them up a little. 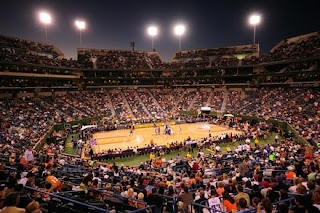 NBA going to Europe, Mexico, and Outdoors: The NBA continued to try new things in the pre-season, as the Lakers, Knicks, and the Timberwolves headed to Europe to play in Milan, Paris, and London. The Spurs also faced the Clippers in Mexico. And the Suns, in what is starting to look like a yearly tradition, held an outdoor game against the Mavericks.

The Teams playing well...: The Jazz have been on an absoulte tear in the pre-season, going 8-0, and so have the Magic, who have been 7-0. The Magic is no surprise: this is their THIRD STRAIGHT undefeated pre-season, and they're on a 21-0 pre-season streak. Too bad it doesn't count in conference finals games against the Celtics. 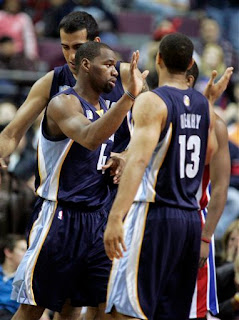 The surprise undefeated squad are the Grizzlies, who have also gone 8-0. And there are a few more surprises, because back in the East, the Cleveland Cavs are the third best team, going 6-2. Should anyone be shocked, since this has been the best regular season team over the last two years? They lost, like, just one player, right? Whatshisface whoever?
And then there's the Celtics, who are looking scary efficient, including their bench. They went 7-1. Plus, Shaq is in Boston and all things in life seem to be happy again.

... And the ones dissapointing: The Suns, last year's Western Conference finalists, lost Amar'e, and look in danger of losing their swagger, too. Then again, this is only the pre-season.

New faces making it count: The two leading scorers of the pre-season are both new faces in their squads: Amar'e in New York and LeBron in Miami. It'll be interesting to see how LeBron's scoring will be effected once Wade returns from his injury. Amar'e looks like he'll flourish with D'Antoni again.
The third leading scorer is Monta Ellis... Is this is a sign for a breakout season?

Miami-Orlando cancelled game: The NBA doesn't want LeBron, Dwight, Bosh, or Stan Van Gundy to fall on a slippery floor and hurt themselves (not too sure about Stan, actually). That is why this game was cancelled in Tampa last night. Too bad, it would've been a chance for Magic to protect their super important pre-season winning record against the new-look Heat.

Injury concerns in Miami: Wade went out about three minutes into the Big 3's debut in Miami. And now, it seems Mike Miller's gonna miss a couple of months. This is not my favourite team, but it'll still be sad to see injuries stopping what could otherwise be a historically good squad.

Rookies stepping up: The silent battle for this year's rookie of the year has already begun. Blake Griffin (injured and missed all of last season), John Wall, and DeMarcus Cousins are all looking good. Should be a fun race to keep an eye on. 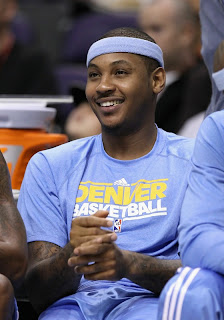 The Carmelo Question: Is he going to New Jersey? No he's going to New York now. No, Chicago is the best fit right now. I think he's happy in Denver.
Too much speculation, too few answers. As of now, Carmelo Anthony is still a Nugget, but things could change as soon as I finish this sentence, really. He seems to have caught the LeBron-Decision bug and look for brighter lights and bigger success. I wonder how the speculation is going to affect his game...