Oh, all is well in the world again. Or should I say 'aal iz well'? Just like Amir Khan's character in Three Idiots, the brand new NBA season is going to offer teams and players around the league a chance to defy the norm, be a little brave, and "fool their hearts" into believing that all iz, indeed, quite well. But which idiots will stand as NBA champs by the time June 2011 rolls along? 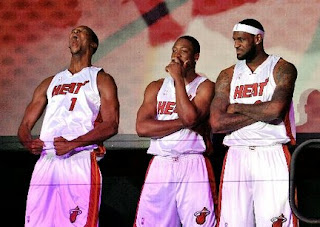 With the explosive off-season moves, this is promising to be one of the most anticipated seasons ever, and I'm going to do a little fore-shadowing into the future and predict who will hold the main silvervare, and the other vares by the time the season wears out! These predictions are based of course on the understanding that there will be no more major trades (i.e., Carmelo Anthony stays in Denver) or major injuries (i.e.: D-Wade, Kobe return triumphantly).

My predicted all star teams...

I'm jumping straight to February: Who will be the All-Star starters for the All-Star Game? Remember, the starters are voted based on fan popularity, but of course, a better a player performs, the more popular they will be. 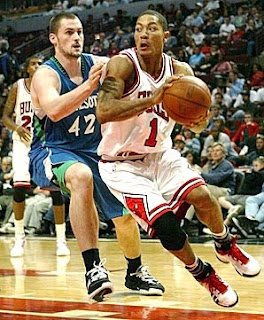 First off: Derrick Rose will win the popularity vote against Rajon Rondo, even though Rondo is more likely to be having a better season.
Secondly, I think Amar'e will just about edge Chris Bosh and Kevin Garnett in the second forward spot. And if Bosh does make it, it would mean all the three idiots of the Miami Heat in the starting squad, which would be incredible.
Also, Amar'e played as Center in Phoenix, but is a forward in New York, which is why he and Dwight Howard both make it.

I would personally replace Yao with Gasol here, but Gasol is listed as 'forward', and no way in hell even a limited Yao Ming doesn't make this team with the entire force of the Chinese nation behind him. Still, this looks like a great squad.

And by the way, East will win, based on more balance/understanding in the squad.

Now, let's get on to the end-of-season awards... I have been conducting polls and discussions on the Hoopistani Facebook page over the last couple of weeks and have gotten great responses to many of the questions about MVP, ROY, etc. But these here are my predictions...

Most Improved Player: Darren Collison. A hard one to classify and call - who is even considered here? Good players who become great? Average players who become good? Or crappy players who touch averageness? Collison is my pick here: the youngster went from Chris Paul's backup last season to torching the league after CP3's injury. He only got 12.9 ppg and 4.4 apg, but his potential is much greater. This time around, he has been traded away to the Pacers, where he will man the point from day one. I am expecting big things from him in a squad that isn't otherwise going anywhere. 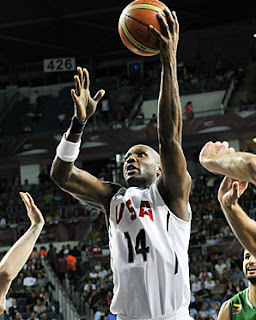 6th Man of the Year: Lamar Odom. I understand that Odom will be starting for the first couple of months of the season because of Andrew Bynum's injury, but even after the Laker forward slips back the bench, he will do what he always does: become the floor general of the Lakers talented second squad. I have been much impressed by Odom after his exploits at the FIBA World Championships, and I'm expecting him to play the best basketball of his career this season.

Coach of the Year: Erik Spoelstra. He will take a 40-something Miami Heat team from last season and make them a team challenging 70 wins and history this year. Okay, no, he won't be the reason why they win so much, but I expect Spoelstra to do what he should do in a situation where he has an embarrasment of richest with LeBron, Wade, Bosh, and others, which is to make sure they gel together, play the right system, and play good defense. He will of course get critisized for not being the reason behind their success, but at the end of the day, he would've done his job well.

Defensive Player of the Year: Kevin Garnett. KG is making all the right noises about a strong, comeback year. This will be a close battle with Dwight Howard, but I think Garnett's return to full form marked with strong overall defense by the Celtics will propel him to retain this award, which he won in 2008.

Rookie of the Year: John Wall. It will be a three-way battle between Wall, Blake Griffin, and DeMarcus Cousins, but the number one pick will live up to the hype. He's one of the most freakish athletes I have ever seen: get ready for him to bring a whole new level of excitement to the Wizards and the whole NBA. 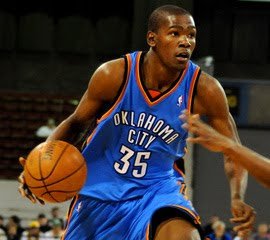 Most Valuable Player: Kevin Durant. LeBron and Wade will share the credit for Heat's success. Kobe will be going slow for most of the regular season. Dwight etc just aren't good enough.
There will be no bigger individual star by the end of this season that Kevin Durant. He was the league's leading scorer last season (the youngest ever), and took over the entire planet during the FIBA World Championships, winning the tournament's MVP and being generally awesome/unstoppable. He will be the primary killer of the Thunder, and the media loves him, which always helps with the MVP voting.
The Durantula it is!

And now... on to the Team predictions.

This is what the Eastern Conference Playoff Seedings will look like:

Yes, Heat will streamroll through everyone. Magic will do what they've always done efficiently. Celtics will want to win more to have home-court advantage. I say the Bulls will be the big improving team, but still not as good as the top 3. Knicks will be the team with the most improvement in the East.

And the Western Conference: 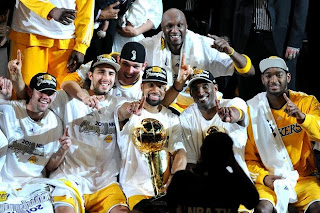 The Western Conference was very close after the Lakers' number one spot, and will continue to be so. Thunder will make a lot of noise, and yes, Grizzlies will sneak in.

I expect the Conference Finals to be: East - Heat vs. Celtics, and West - Lakers vs. Jazz.

And the NBA Finals will be what everyone is hoping for... Heat will beat the Celtics in a match-up of blood, sweat, and tears, and in the West, Lakers will have a much-easier time against their opponents.

The Finals themselves? LeBron, Wade, and Bosh will continue to do what they have done all year, but the Lakers depth of talent, their genius coach, their defensive ability, and the clutchness of Kobe will help them edge this out in six or seven games. Pau Gasol will step up. Ron Artest will do (and say) some crazy shit. Odom, Bynum, Barnes, Blake, Fisher, Brown, Vujacic, will all chip in for the franchise's 17th 'Chip.

So I predict Los Angeles Lakers as 2011 NBA Champions, making it a Three-Peat. Kobe gets Finals MVP again.

Phew. That was fun and exhausting. Now it's your turn: Gimme some predictions!
Posted by KARAN MADHOK at 13:53