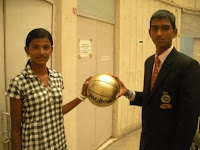 "My ambition is to there, on that basketball court, representing India in the basketball world championships!"

14-year-old Poojamal from the town of Kottayam in Kerala got to realise an amazing dream last week - she was part of the lucky few basketball fans that attended several games of the ongoing FIBA Basketball World Championships in Istanbul, Turkey, make dozens of new friends, and be trained by some of the best coaches in the world.

Two Indian sub-junior players, Poojamal, and Yogesh Kanderiya from Rajasthan, had been selected by BFI to be India's official representatives in FIBA's "Children of the World" camp in Istanbul, set to be held around the World Championships. The two youngsters were accompanied by coach P. Deepa Sundari from Tamil Nadu for this experience from August 24-31.

A highlight of this trip was their chance to watch six World Championship games, including three games played by the exciting USA team - USA vs Croatia, USA vs. Slovenia, and USA vs. Brazil. "Just watching these games made me want to be there, playing for the Indian team, and playing against the world's best at this stage," said Kanderiya.

Kanderiya was given further encouragement for his own stellar play when he was chosen as the best Boy player at the Children of the World camp. Around 400 teen boys and girls from 200 different FIBA countries were invited for this camp to improve their basketball skills and participate in 3-on-3 basketball games under the watchful eyes of expert coaches from around the world.

Although only 24 of the best teams in the world participate, FIBA has designed the "Children of the World" project aiming to provide a possibility for official representation of all of the FIBA member countries through "young ambassadors" - young basketball players and coaches who will come together in a global basketball camp. One boy, one girl, (both between the ages of 13-14) and one young coach were sent to Istanbul from each of the FIBA-member countries and were hosted by the Turkish Basketball Federation.

"It was a very good experience," Kanderiya added, "We got the chance to meet other kids from all over the world - from countries like Gabon, Australia, New Zealand, USA, Lithuania, and Bhutan."

"We did a tour of Istanbul as well - it is a beautiful city - we visited several mosques and went shopping, too."

The youngsters did their share of cheerleading for India, too, taking part in the colourful opening ceremony of the Championships and waving the Indian flag high at every occasion!

"We were taught some great drills and basketball fundamentals by the coaches," added Poojamal, "We did passing, dribbling, lay-ups, and ball-handling exercises, and also played 3-on-3 half-court games."

Both the youngsters came out impressed by the Championship games, stating the USA-Brazil thriller, where USA won 70-68 on a last second miss, as the best game of the lot. Poojamal said that her favourite player was Kevin Durant, whereas Kanderiya was a fan of Russell Westbrook - both American players who play for the NBA team Oklahama City Thunder.

The "Children of the World" project was designed to educate, engage, and influence young ambassadors to be aware of and sensitive towards a range of global issues and develop towards playing an active role in their respective countries as "citizens of the world" - judging by the experiences and exposure that these two Indian youngsters received over the past week, it is fair to say that they are not only on the path to become accomplished basketball players but also took a few steps forward as globally aware citizens.
Posted by KARAN MADHOK at 14:26