FIBA World Championship for Women tips off in Czech Republic 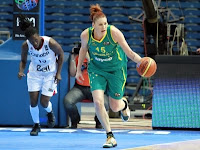 Indian referee Snehal Bendke has been nominated to participate as one of the officials at this event.
Posted by KARAN MADHOK at 14:49