Ever since the NBA Mahindra Challenge began to hold its league in Ludhiana, the city's Guru Nanak Stadium hasn't had a calm weekend afternoon. Every Saturday and Sunday has seen hordes of teams from all around Punjab suit up to play in this exciting and competitive league. 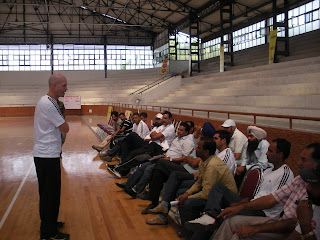 But this Saturday was different. With exams in the air, most youth teams decided to take a break from the hoops, leaving the stadium eerily quiet. Well, mostly eerily quiet, because this was the day that NBA-India's Director of Basketball Operations Troy Justice chose to hold a clinic for about 20 experienced coaches from around the state. With the help of the Ludhiana Academy Basketball team, Justice worked on several defensive, dribbling, and offensive drills.

If you're like me, even the relative quiet of the stadium, free from all the hype and the blaring speakers and cheering crowds, would've resulted in a different kind of excitement. Relishing the opportunity, I got to observe Justice teach several drills to the players and the coaches, especially as he focused on every tiny detail that effects the big picture. It is as important to perfect your shooting action as it is to know where to position your feet when defending between two players. It is as important to make that extra pass on offence as it is to know exactly when and and where you should raise your elbow to block off a player trying to make cutting move to the basket. 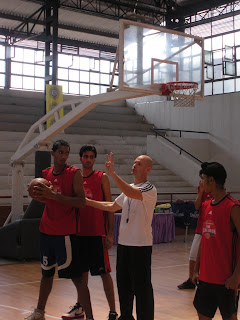 Justice spoke to the coaches about the importance of being patient with the players, even the ones who were slower in picking up the little details. The constant repetition of the defensive and offensive plays, done over and over again with each players could have been boring to the layman, but to these coaches, it was a fascinating exercise in perfecting your practices. The coaches also took the time to hold intense discussions amongst themselves about these drills. They took notes, watched, and learned several of the drills. I don't think the players involved realised how lucky they were!

Justice's motto for the day seemed to be: "Practice hard so that the games are easy." He said that if the coaches put the players into extremely difficult situations during the practices, they would not only find a lot to teach from these situations, but the players would then find the in-game situations easier. Justice held difficult offensive drills such as pitting three players against six or asking one player to dribble down the court to score at the basket on the other end while being defended by two players. 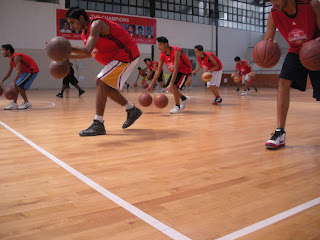 At the end of the day, the coaches were presented with a coaching tips DVD and NBA-India Coaching guides by Justice. He also encouraged them to create their own detailed playbooks so that they could be more involved with the design of each aspect of the game.

An afternoon well spent, then. In taking their time to summit together to theorise and practice the teaching of hoops, each of the coaches will be able to go back and influence hundreds of other basketball players around the state and the country.
Posted by KARAN MADHOK at 14:19