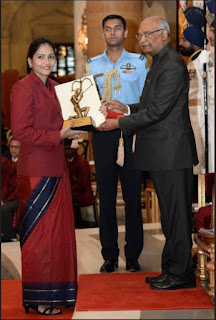 Prashanti Singh, the 33-year-old shooting guard born in Varanasi, was conferred the prestigious Arjuna Award by the President of India Ram Nath Kovind at the Rashtrapati Bhavan in New Delhi on National Sports Day, August 29. Singh was among a list of 17 Indian athletes to receive the Arjuna Award on Tuesday, from sports including Cricket, Hockey, Paralympics, Golf, and more. Former hockey captain Sardar Singh and Paralympian javelin thrower Devendra Jhajharia were given the prestigious Rajiv Gandhi Khel Ratna awards. The Arjuna Awardees received statuettes, certificates and cash prize of Rs 5 lakh each.

Singh is now the most decorated women basketball player in India, holding the national record for most number of medals (22) in national championships for Delhi while she was an employee for MTNL. She has represented the national team in the 2006 Commonwealth Games, the 2010 and 2014 Asian Games, and six FIBA Asia Women’s Championships (2004, 2005, 2007, 2009, 2011, 2013), plus one more at the junior level. Last year, Singh and her sisters were given the Rani Laxmi Bai Award in Lucknow.