There are two ways to preview the NBA Finals. The short version and the long version.

The short version of the upcoming Cavaliers and Warriors clash isn't actually about any of the players involved in the series at all. It's about two young kids and the magic of Vine.

Want to know everything about the Golden State Warriors? Riley Curry, the two-year-old daughter of Stephen Curry, quotes Big Sean to tell us exactly how Curry and the Warriors currently feel right now. "Way up... I feel blessed."

We could just leave it at that and let you guys decide which child vine-d it better. But of course, you're not here for the short version, are you?

Welcome to the 2015 NBA Playoffs Expert's Bracket Challenge. Before the playoffs, I joined ranks with fellow fans and experts of the NBA in India - Akshay Manwani (@AkshayManwani) and Kaushik Lakshman (@_kaushik7) - to turn this season's playoffs into our own mini competition, and in the process, give the fans of the game some hoops food for thought. Akshay suggested the idea and the rules before the playoffs begin, and after two rounds, we are still in fierce competition.

Here are the rules again: Each of us will get +2 for getting the series result correct. Additionally, if we get the scoreline right, we get a bonus of +1. You can find our First Round predictions here. Below, we move on to the tally on the scorecard and then make our predictions for the Second Round. Keep yourselves updated and feel free to give us your own predictions in the comments section at the end of this post. Akshay, who got on to a hot start in Round 1 and has mathematically wrapped up the competition, headed to the first ever Hoopistani Bracket Trophy even before the Finals begin. Here are the scores as they stand right now.

Scorecard
And now, here is the long version. If the vines above didn't satisfy you, here is how we feel that the 2015 NBA Finals are going to go down....

Akshay's Pick: It’s probably fair to say that the two best teams made it through to the NBA Finals. The Golden State Warriors started the season hot, finishing 67-15 and hardly suffered a hiccup (other than being down 1-2 against Memphis) in their road to the NBA Finals. The Cavaliers had an ordinary start but once LeBron had the injury break and the Cavs made the trades for JR Smith and Iman Shumpert, they played a whole lot better, which reflected in their series wins against Chicago and Atlanta in these playoffs.

Even so, a few weeks ago, particularly before the start of the Cleveland versus Chicago Conference semifinals series, it would have been difficult to imagine Cleveland giving any trouble to Golden State in the Finals. But the manner in which the Cavs have played, without Kevin Love and with a hobbled Kyrie Irving, is proof of LeBron’s genius and the stellar contributions by Smith, Tristan Thompson, Timofey Mozgov and Matthew Dellavedova. If James can get this supporting cast to contribute one final time this season at a high level, while creating all kinds of matchup problems for Golden State by himself, it should test the Warriors.

Golden State’s biggest concern has to be Klay Thompson’s health. They cannot afford Thompson to sit out any game for he is one of their most important two-way players. If Thompson is at full strength, the Warriors led by Curry, have the greater offensive arsenal, play good defense, have home-court and the deeper bench. They must also look to push the pace rather than allow the Cavs to dictate the pace and reduce the contest to a half-court game. To summarize, James may be the best player in the contest, but the Warriors will finish as the better team. Warriors win 4-2.

Karan's Pick: In a season where LeBron got more rest than any full season ever before, he has responded with characteristic brilliance in the playoffs, dominating every matchup thrown at him in the previous three series and making the Eastern Conference bow to his mercy. Curry, meanwhile, has become the NBA’s breakout star with the ability to change momentum in a couple of possessions and destroy the will of his opponents no matter what type of defensive scheme they throw at him.

In the matchup, however, all of the numbers on both ends of the floor point overwhelmingly in Golden State’s direction. They are a better team on offensively and defensively, have more depth, and a stronger home advantage. Golden State's 12-3 record in the Western Conference playoffs is arguably more impressive than Cleveland 12-2 evisceration of the East.

But Cleveland have LeBron, who is the best individual player in the series and the only major player on each side with championship experience. This will go a long way over the young and inexperienced Warriors, and it is respect for his abilities and Championship mettle that I feel that Cavaliers will have a chance in this series. 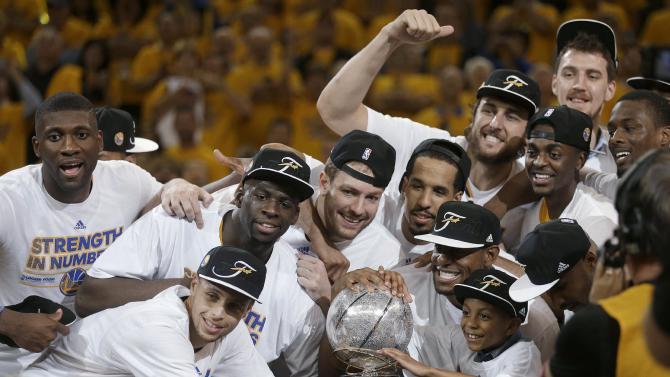 Eventually, I don’t think even LeBron will be enough to stop the upcoming wave. The Warriors and the Splash Brothers are that kind of an unstoppable force this season, and they will eventually bomb their way to bring the franchise its first NBA title since 1975. Warriors win 4-2.

Kaushik’s pick: After a long season, it all comes down to this. Golden State has been consistently excellent from start to finish, and while Cleveland took a while to get going, they found their groove post the Mozgov-Shump-JR trades. We can confidently say that we have two deserved finalists.

Golden State’s free flowing offense and intense defence might be unlike any opponent Cleveland has faced. Curry, lanky and weak as he may physically seem, is unstoppable. Thompson is a dangerous 2 guard, Draymond Green is a bad bad man, Barnes is quietly having a fantastic playoff run, and Golden State is just a machine rolling at optimum setting. You could argue they haven’t been very well tested in the playoffs due to how the matchups worked, especially against such a big superstar, but that might be clutching at straws to find a weakness.

Cleveland on the other hand, have ridden the LeBron express, who has been on a one man mission that has effectively taken down the Eastern Conference by himself. Thompson’s rebounding has been such a huge plus for the Cavs, but you would have to wonder whether he will have the same effectiveness against the likes of Bogut and Green. Smith, Shumpert and Dellavedova will have the same opportunities as before because LeBron is LeBron and much will depend on whether they can be as effective as they have been.

Cavs have been extremely impressive this post season and perhaps have punched above their weight through this run, but perhaps this is where the weight category is too high for them. Golden State is a deeper, more polished team, that in my opinion, will be a juggernaut and too much for the Cavs to deal with. Warriors win 4-1.
Posted by KARAN MADHOK at 10:34