Chhattisgarh's basketball squads will be the center of attention once again as they look to defend their title at the 64th National Basketball Championship for Junior Men and Women, set to be held in Cuttack (Odisha) from September 1-8, 2013. The tournament, which will pit India's finest Junior (U18) basketball players as they represent states and provinces from all across the country, will be organized by the Basketball Federation of India (BFI) in association with the Odisha Basketball Association.

A total of 46 teams - 23 in each of the two divisions - will compete against each other for the crown. Matches are set to be held at the Jawaharlal Nehru Indoor Stadium in Cuttack, with tip off early morning on Sunday.

A year ago, Chhattisgarh dominated the Junior Nationals winning gold medals in both the boys' and the girls' divisions in Puducherry. They will be amongst the favourites this year again, especially since they won another double gold in the Sub-Junior competition at the Nationals in Patna earlier this week. Maharashtra and Kerala (Girls) and Punjab and Madhya Pradesh (Boys) could be amongst the top challengers to Chhattisgarh's crown. 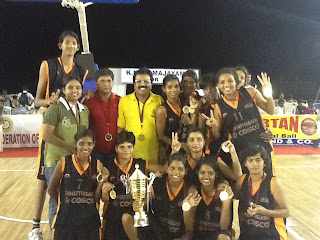 At the tournament's onset, the BFI's CEO Roopam Sharma said, “Basketball Federation of India is delighted to host the 64th Junior National Basketball Championship for Boys and Girls in Cuttack. The BFI is thankful to the Odisha Basketball Association for rendering their support in organizing and hosting the event. Young and dynamic players will be the path of success for basketball in the country. This event will showcase competitive games and a pool of talented players, who will comprise the next set of senior level players.

The tournament will be held on the league-cum-knockout basis, with the Finals scheduled for September 8.