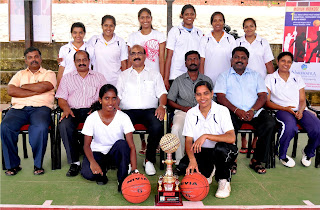 IOB (Chennai) Men and South Western Railway (Hubli) Women won their respective Finals matchups and took home the trophy at the end of the 1st Midhun Markose TDBA All India Basketball Tournament, held in Thiruvanathapuram (Kerala) from August 4-9. The finals were held on Friday, August 9 at the Central Stadium in the city.

The Men's final was a close contest as Vijaya Bank (Bangalore) led IOB 32-29 at halftime, but IOB made a comeback in the second half behind 19 points by A. Aravind to win 68-63. Vijaya Bank had their own Aravind who added 21 points in a losing cause.

In the Women's final, the eventual winners found themselves in a similar predicament midway. Hubli's South Western Railway trailed 28-19 at halftime to KSEB, but turned the score around in a thrilling finish to inch away to a 63-60 win. Savitha LS scored 24 points for the winning side eclipsing 19 points by KSEB's Merlin Baby. 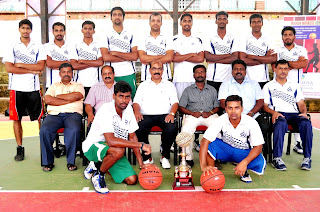 Actress Gouthami Nair and international footballer Joe Paul Archery were amongst the celebrities attending the Finals.

Customs and Central Excise took the third spot as they defeated Indian Army 88-64 after leading 44-36 at the half time. Customs which had lost to Indian Army in the League round thus avenged their defeat as it worked today as an cohesive unit with 6 of them scoring in double digits. Gopal Ram had 19 points for Indian Army in the loss while Suresh Kumar added 16.
Posted by KARAN MADHOK at 05:17