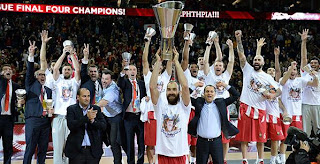 For the second consecutive season, Greek club Olympiacos beat the odds and reached the pinnacle of European club basketball as they retained their Euroleague Basketball title after defeating Real Madrid at the O2 Arena in London 100-88 in the Final. This was Olympiacos’ third Euroleague title in their history and the third consecutive year that the championship was lifted by a Greek after, after Panathinaikos won in 2011.