Maybe a change in the format of the game was all that Indian basketball needed for their big boost. 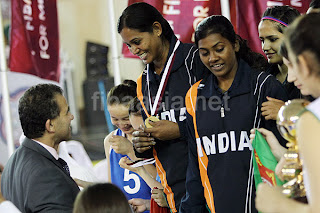 India hasn't had any memorable success in international basketball for long stretches of its history. But ever since FIBA has begun to promote the newer, 3x3 format of the game, India has gone all in, addint their best players in the 3x3 rosters and seeing some dominant results, particularly in the Women's division.

And now, India's Women are officially on top of the Asian 3x3 Basketball ladder. India won gold at the inaugural FIBA Asia 3x3 Basketball Championship in Doha (Qatar), defeating Mongolia 21-14 in the final game on May 16th. This win marked India's third consecutive gold medal in the 3x3 format of the game, after winning gold at the South Asian Beach Games in Sri Lanka and at the Asian Beach Games in China last year.

India - featuring the likes of Geethu Anna Jose, Anitha Paul Durai, Manisha Dange, and Pratima Singh - came in as one of the favourites of the tournament, and justified the hype by winning all six of their games with relative ease en route to the championship. Jose, India's biggest basketball superstar, was named the 'Best Player' of the tournament! 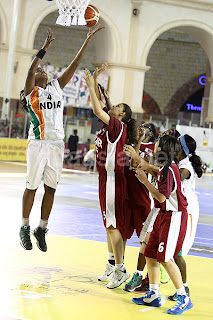 Post the win, Jose said that the India squad "achieved what we set out to do," and Anitha Pauldurai added that "it was a team effort that helped India’s win."

Qatar, the home team who featured two teams in each division of the championship, saw their 'Maroon' side win the gold in the Men's division, beating Saudi Arabia in the final. They were undefeated in the tournament.

The two-day tournament tipped off in Doha on May 15th, featuring 16 Men's teams and 10 Women's teams. Notably missing from the participants were teams from Asian powerhouses like China, Korea, Japan, and Chinese Taipei in contention for the Women. China, Asia's strongest basketball-playing nation, didn't take part in either division. 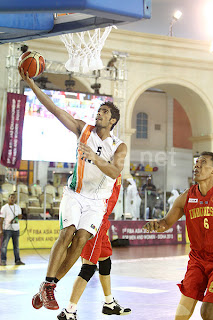 India's Women, in Group B of the Women's division, kicked off their campaign on Wednesday with an easy 20-6 win against Lebanon. They continued this form with wins over Mongolia (21-9), and Nepal (21-4). Their game against Qatar (grey) was cancelled. On Thursday, India faced off against Qatar in the Quarter Final, and completely dominated the hosts to cruise to a 21-5 victory. India defeated Hong Kong 21-8 in the Semi-Final, and their closest contest didn't come until the finale itself when they defeated Mongolia 21-14. In a format of the game that lasts only 10 minutes of playing time, India did marvelously to defeat each opponent by an average of 11.3 points per game.

The Men's field was much tougher, and the relatively-younger four-man squad representing India - Ajay Pratap Singh, Ranbir Singh Virdi, Arjun Singh, and Pratham Singh - had a good run despite getting knocked out at the Quarter-Final stage to Saudi Arabia, who defeated them 16-5 on Thursday evening. India went 2-1 in the Group Stage a day earlier, defeating Indonesia (21-13) and and Turkmenistan (19-17), but losing to heavyweights Iran 21-14. The Final of the Men's tournament was held between Qatar and Saudi Arabia and won by the home side in a thrilling 19-17 contest.

Iran (Men) beat Jordan 19-8 to finish third place, and in the Women's division, the third-place game was decided in a low scoring game woman that went in favour of Turkmenistan over Hong Kong 10-8. 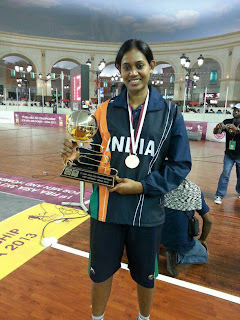 Congrats Ladies, and congrats Geethu, who continues to be the Boss of Indian hoops - and one of the most-feared competitors in Asian hoops. We hope that the Men can begin to duplicate the success in the coming years too. India's Women can look ahead to now taking part in the 3x3 FIBA World Championships. But the most important step ahead should be to start focusing this new-found confidence and success on the official 5x5 version of basketball so India can start making some more waves in Asian and in the rest of the world, too!
Posted by KARAN MADHOK at 09:19