A top-level national club basketball tournament finally came to the city of Chandigarh, and fans who witnessed the action over the past five days were rewarded with games featuring some of India's finest players. Chandigarh's 1st All India Invitational Basketball Tournament saw the participation of eight of the best Indian club sides at the Sector 46 Complex Courts from March 8-12, 2013. On the tournament's finale on Sunday, Chennai's Indian Overseas Bank (IOB) emerged winners, defeating favourites ONGC (Uttarakhand) to lift the trophy. 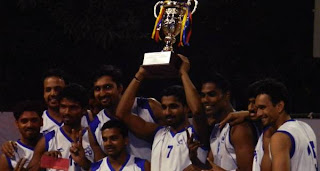 ONGC came into the Final featuring the tournament's hot hand Trideep Rai, who had up to that point, been the leading scorer in the tournament. But balanced play from their opponents turned out to be too much for ONGC, who trailed through the course of the game, down by 15 points at half time and finally losing the game 71-57. Pratham Singh dominated proceedings for IOB with 27 points in the Final, while Mihir Pandey chipped in with 18. The winning team (IOB) won Rs. 1.5 lakhs prize money, while the runners-up received Rs. 75,000.

Earlier in the day, Punjab Armed Police (PAP) faced Indian Army in one of the best games of the tournament, a back-and-forth encounter that remained close until the very end. PAP were able to sneak by to win the game 72-71 and claim the Rs. 50,000 third-place award. Army led at halftime, but PAP were able to turn the score around behind big performances by Harminder (20) and Tejinder Pal Singh (18). Gopal Ram (27) was the leading scorer for the losing side.

In the previous day, IOB had entered the final after they blew out Indian Army 87-60. ONGC defeated PAP 87-76 in their semi-final in a comeback win after trailing at halftime.

The tournament was organised by the Chandigarh Administration. Check out a special feature by Neeraj Grover over at SportsKeeda, who attended the games in Chandigarh and wrote a nice first-person account of the championship!