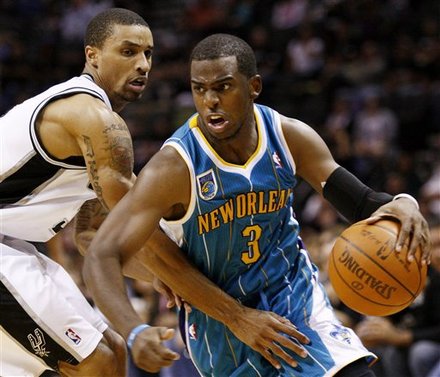 One of the most encouraging yet under the radar NBA stories this season has been the return of Chris Paul, CP3. The point guard who has been in contention for the best pg in the league has been recovering from an injury-riddled season, playing only 45 games in the 2009-10 season. While he was gone, the likes of Steve Nash, Rajon Rondo, and most emphatically, Deron Williams touted for the 'best point guard' spot in the league.

Given Paul's injury problems and Williams' consistency in the highest playoff level, I would give Deron an edge in the race.

Back to CP3 though - after what seemed to be a strange few weeks in the off-season where Paul wanted to leave New Orleans, things got even stranger as he did a complete U-turn and decided to stick with the Hornets. He has returned to a team that hasn't gotten that much better or that much worse... The Hornets still have David West, Emeka Okafor, and Peja Stojacovic. They've surrounded this team with other talents like Marcus Thornton, Trevor Ariza, and most recently, Jerryd Bayless. Hornets lost talented backup pg Darren Collison to the Pacers.

So, was the team really going anywhere? So far, the Hornets have been one of only three teams to have a perfect 3-0 start (Hawks and Lakers are the other two). Hornets have beaten the Bucks, Nuggets, and Spurs already, and Chris Paul has been on fire, playing as if he never left. In the three games this season, CP3 has been averaging 20 points and 9.3 assists per game.

But the big question is, can the stellar play of Paul and the Hornets continue? Three games is no sample size, but its an encouraging start nevertheless. I'm still highly doubtful of this roster, especially considering the competitive in the Western Conference with all its improving teams. I'm sure Paul will continue his great start, and will fight to become one of the best, if not the best pg in the league again. The Hornets though... I'll be shocked if they finish above seventh in the West.

Still, its nice to see an exciting team back in action!
Posted by KARAN MADHOK at 21:38