Share|
The success of any organization depends on several different qualities of the individuals who comprise of it and on the outside influences working towards it, but invariably, its true character shows through its leader. A country’s achievements are represented largely by its President or Prime Minister, an army by its general, a multinational company by its CEO, and a sports team by its captain.

If you have been following the recent improvements of the Indian National Women’s Basketball team, you would’ve noticed something beyond just the successful results: you would notice a new-found confidence, youthful energy, an ambition to keep improving, and a savvy awareness amongst the athletes. 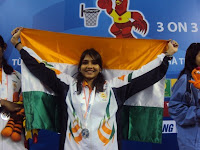 It is then perhaps no surprise that all these qualities are exhibited by the team’s leader: the young but experienced Prashanti Singh. Prashanti, 25, has been growing with the national team for around eight years, and now as captain, she oozes of infectious confidence and ambition that has spread amongst the other girls in the squad to help form a formidable young unit.

In a recent discussion, the star shooting guard told me how, despite the dearth of career development and professional opportunities for female basketball players in India, the girls have continued to improve their level for their love of the game. The team’s steady rise has showed on the biggest stage over the past five years – the FIBA Asia Women’s Championship. The girls finished 10th in 2005, 7th in 2007, and 6th at the championship held at Chennai in November 2009.

True, the results have been nothing to write home about, but at least the team is headed in the right direction. One of the highlights of Prashanti’s career was playing in the Asian Indoor Games in Vietnam, where she captained her squad into the tournament’s final only to lose to Thailand by one point and settle for the silver medal.

The current team is the youngest team that Prashanti has played on, and she says that the change in attitude has been very encouraging. “When I first came in, the team only had a few youngsters – now, just like the men’s squad, the majority of the team is of younger girls, who with the help of a few experienced older players, have been given a chance to grow as a team together.”

“We’re performing much better than the boys are!” she boasts – the Indian Women’s team ranks 43rd in the World FIBA rankings, as opposed to the Men, who are 49th. But don’t just follow the rankings – there has been a change in attitude, commitment, and a new-school system of leadership and management that has combined to move the team in a positive direction.

Unfortunately, there are still hurdles for the women’s game in the country. “The system is biased against women,” says Prashanti, who is a Class-III employee working and playing for the MTNL in New Delhi. “The services are slower to help women improve in their careers as compared to the men. Even after my achievements my position at work hasn’t improved. There are only three national level women teams – Mahanagar Telephone Nigam Limited (MTNL), Railways (combined), and Kerala Electricity Board. We have fewer options and less bargaining chips than the men do.”

Because of this, the current team has a lot more girls that are students than those who are in government service, and many of these youngsters are looking for private sponsorship. “We need more teams in India,” she adds, “College students are now more aware of their careers, why would they join a service for a job that isn’t ideal? We need a solution soon, because the good young players won’t settle for these jobs anymore.

“Despite all this, we’re still playing well; and its all for the love of the game. The good news is that we are moving away from the old system of favouritism for the older players – the new girls are looking to develop their game further holistically. Everything is becoming commercialized and they are very aware of how basketball is growing in India and around the world. They are learning things off the court too. Many of them are interested in moving on to leagues in other countries.”

The recent major breakthrough for Indian women in basketball was the success of Geethu Anna Jose. Geethu is India’s biggest basketball star and one of the best players in all of Asia. The talented Keralite played two fruitful seasons with the Ringwood Hawks, a Division II team in Australia in 2007 and 2008. Prashanti notes how Geethu’s game improved under better training and league experience abroad, and she is ready to make that jump, too.

“My aim is to play for a good league abroad,” says Prashanti, “Anywhere where I can hone and improve my skills.”

Talks of a domestic basketball league in India, akin to the NBA or the IPL, have been in the air in recent months, and Prashanti minces no words in sharing her opinions. “We will not improve much by playing in short sporadic tournaments [like the current system]. What we need is a domestic league so that we can get a season of regular games, regular basketball experience of basketball at a competitive level, and thus improve our game.”

Experience is one of the team’s biggest weaknesses: “We start each game with great energy, but begin to struggle whenever the opponents switch tactics to counter us. We need to play more so we can get experienced to deal with different systems and situations. With a league we will learn more about our own potential.”

Another recent weakness of the team was size – for a few years, the squad didn’t have depth beyond Geethu at the Center position. The problem in size also coexisted with over-reliance on the team’s experienced superstars. Prashanti believes that these problems are now improving – for example, the youngster Harjeet expertly filled in for Geethu’s absence for a few recent games. A lot more tall young players are being scouted for the national squad, too.

“We’re improving on several levels,” says Prashanti, “As captain, I have seen great team chemistry between the girls. The youngsters are also gaining confidence and the team doesn’t always have to depend on the seniors. Although we are still relatively small, we are good enough now so that our success doesn’t start and end with our shooters as it used to.”

Prashanti’s responsibilities as captain have also spilled off the court. She has had to be aware of the management and promotional side of the squad, and understands the importance of popularizing the sport of basketball amongst Indian fans. “It will take time for us to improve – we have to be patient,” says Prashanti, “We should play against some Asian countries with which we can compete, and then we can move on step by step to try and match the level of China or South Korea. Given time, we can have world-class players in India, too.”

“If you take the example of cricket: the game only started to gain widespread fame when we won the World Cup in 1983 – and now, 27 years later, with IPL we are at the top of the world. Cricket is a game played by a dozen countries and basketball by over 200 – I’m sure that Indian fans will soon grow fond of basketball, too.”

She added, “People in India are aware of sports a lot more than before – we just have to teach the game to them in whatever language that they understand.”

Prashanti, who is known by the nickname ‘Boskey’, began her love affair with basketball in her early teens. She made her debut with the senior team at the age of 18. She is from the acclaimed ‘Basketball family of Varanasi’, as she is one of four Singh sisters to have represented the Indian national team. Her older sister Divya Singh has also been India’s former captain and has carved her own space in the world of basketball. Divya has moved on to studying about basketball management in the US, leaving Prashanti to take the helm of this ever-improving squad. Younger sisters Akanksha and Pratima are also her teammates.

“I used to follow my sisters to the Varanasi courts, and once I started playing the game, I just couldn’t stop,” says Prashanti, “I was given a break early in a tournament, and ever since, basketball has been my life. I had to find a way to get on the court and play everyday. Our family discussions are always about basketball!”

The national team is blessed to have players with a background and love for the game like Prashanti. The girls will be heading to their next major challenge in the form of the 16th Asian Games (XVI ASIAD) that will be held in Guangzhou, China, from November 12-27, 2010.

With a leader like Prashanti, one thing is for sure: the team will be motivated to do their best at any level. Geethu, the team’s most talented player, has warm words for her captain: “She is a very dedicated player, a very hard worker, and a very supportive captain - her only target is to WIN WIN and WIN! She just can’t stand to lose.”

“I have had great luck in the game,” says Prashanti, “On whatever level I have played basketball, I have kept on winning, with or without anyone else’s support.”

This article was first published as the cover story of the April (fifth) edition of the Sports Keeda e-magazine. Click here to download the magazine