BFI: It wasn't me

Following basketball star Geethu Anna Jose's "ban" from being able to in a professional league in Australia (as reported on TimesNow.tv), I wrote an article on my blog protesting against Geethu's plight, called How to suppress your superstars - 101. This article was also published on SportsKeeda.com.

The TimesNow.tv article mentioned this: "... the Indian Olympic Association has denied permission since Geethu is also the captain of the Indian women's Basketball team. According to the explanation given by the IOA, the Basketball Federation of India is supposed to organise a National camp during the same time." 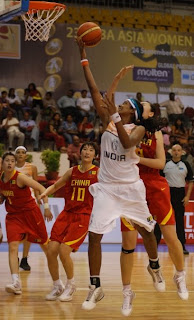 It didn't take long for a response to my article: the Basketball Federation of India (BFI) made a press release just three days later refuting the blame for denying Geethu from playing in Australia.

The release, posted by former women's national team captain Divya Singh reads something like this:

Basketball federation of India refutes the blame of denying their National player for playing in Australia.
One of the recently published articles stated that Geethu Anna Jose, an outstanding and highly reputed International Basketball Player of the country was denied the opportunity to train and play in the Big V Women’s program in Australia from 15th February to mid August, 2010 by the Ringwood Basketball Association, Victoria, Australia by the Basketball Federation of India.
BFI clarifies that Jose sent her E-mail to the Federation at 8:42 PM on 25th January, 2010. The 26th January, 2010 being a National Holiday the office was closed. Her permission to participate in the above program in Australia was given on 27th January, 2010 addressed to Head Women’s Coach Ringwood Basketball Association Inc, Australia by Email and a copy of the letter was also forwarded to Geethu by Email.

“We never deny any player, until unless it comes to our commitment towards the nation” says, Harish Sharma, Genl secy BFI.
In few months Geethu, a member of the Indian team, will be representing at the reputed Asian Games. Basketball Federation of India is planning the National Coaching Camp and Foreign Exposure for the Men & Women teams in order to prepare Indian teams for the Asian Games this year where it is mandatory for the selected players to participate in the Coaching Camps & Foreign Exposure prior to their respective International participation and the Asian Games.
In such cases, BFI always considers National interest, and it is expected of every player selected, to attend the National Coaching Camps for the preparation of International events. Basketball is a team game and the whole team needs to practice together for the work-outs on offensive as well as defensive strategies & team coordination.

I applaud the BFI if they really did give permission to Geethu to join the team in Australia. But if the BFI isn't stopping her, then why is she still here?

I wholeheartedly agree that national interest should stand above all, but it shouldn't come in the way of player progress if possible. Geethu had been quoted saying that her league season in Australia would end three months before the Asian Games, giving her ample time to practice with the team. In situations like these, doesn't she deserve to go and improve her skills abroad?

I was finally able to contact Geethu and get her side of the story.

This is what Geethu said about the issue: "... About the Australian league: What really happened was, finally [the BFI] gave me the permission to go, but also they said i have to be back for this Asian games camp going to be held at next month."

What she means is this: the BFI did allow Geethu to go, but expected her back much too early, and for her to return in a month would mean that she misses a large part of her professional season with the Ringwood Hawks in Australia.

Geethu was, after all, the top scorer in all of Asia (!!) during the FIBA Women's Asian Basketball Championships in Chennai in November. Pardon me for thinking that she deserves a lot more respect and recognition for her efforts.

These questions remain to be answered for the conflict to be fully resolved. But this is just a start of such conflicts - if we are hoping that Indian players improve their quality of play, then they will eventually be wooed by better basketball leagues in other countries - Australia, Europe, and hopefully in my lifetime, the NBA. Will this be a reoccuring situation every time our players want to head out of India?

Indian federations / associations need to learn from incidents such as those of Geethu and, of course, from the problems faced by our only Olympic individual gold medalist Abhinav Bindra, who was involved in a tussle with the NRAI.

Based on the opinion of most of the players and coaches I have spoken to, the BFI's General Secretary Harish Sharma seems to be determined in helping promote basketball in India the right way. He should be thanked for his swift response to this issue, but I feel that there is a long way to go before we have a smooth system of dealing with these complicated issues.