When I Be On The Mic: Experiences from commentating 3x3BL basketball from Jalandhar


I have been a basketball journalist in India for nearly a decade, with most of the work coming in the form of research, typing out the written word, and more recently, speaking about the game with interviews on the Hoopdarshan podcast. But over the past weekend, I was able to check a box that I hadn't ever considered to even dream of: in-game commentary! 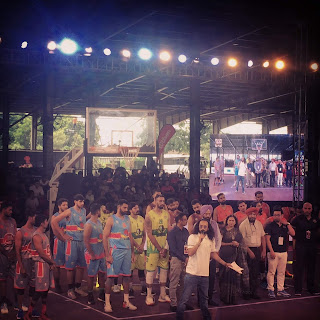 The second season of India's FIBA 3x3 basketball league, the 3x3BL, tipped off at the Lovely Professional University (LPU) in Jalandhar on Friday, August 2. The new season of the league featured 12 men's teams divided into two conferences, and, for the first time, six teams for women in their own conference. I was honoured with an invite to commentate on the first two days of the event, during the live streaming broadcast of all of the round-1 men's matches for 3BL's Facebook and YouTube pages.

It was a confusing, strange, educational, and ultimately, a fun experience. Although I have had experience talking about basketball thanks to my podcast, I usually play the role of the 'colour' commentator, as in, the one that brings in deflections and hype to the story, instead of the 'play by play' guy who tells the story as it is. In Jalandhar, however, I was the only one on the commentary desk, which meant that I had to play both roles: narrating the action as its happening, and peppering it with 'colour' whenever necessary.

I have a fairly good knowledge of the big-name Indian basketball players (I have been responsible for making many of those names 'big' in the first place) and of the backgrounds of these players. But at least half of the participating players at the event were new to me, and I had to learn about them in research right before the event or on the fly as I commentated. This meant that, while I had a treasure trove of information to share about the likes of Amjyot Singh Gill, Amritpal Singh, Inderbir Singh Gill, Palpreet Singh Brar, etc., I stumbled often matching the face to the name on the back of the jersey with some of the other players. This, of course, led to a few errors and rookie mistakes, like erroneously calling Team Gurugram's Rajan Sharma "Ranjan" for most of the day!

Another early challenge was the quick pace of the game. Basketball is a fast game anyways, but 3x3 - where possessions change in a matter of seconds and big moments happen quickly one after the other - is even more boosted up. In the first few games I commentated, I tried to talk about everything: every cut, every pass, every shot, every turnover, and it led to me sounding as if I was on fast-forward. As the day progressed, I learned to slow down and focus on slightly-bigger things. As it is with basketball players who put in practice in the fundamentals, the game itself slowed down for me.

3x3 is a new-ish version of the game for me, too. And often, I would forget that the outside arc is a 2-point shot, not a three. I had to correct myself on air several times. There was a big moment in the first semi-final of Day 2 between Mumbai and Kolkata where Mumbai was down by two points and Inderbir Gill took an outside shot to tie the score. My instinct, however, made me think it was a three, and I shouted, "Inderbir for the win". He made the shot - and within the next split second, I corrected myself and mentioned that the games are now tied, that we are now going into overtime. As an aside, that was the most exciting game of the weekend and many other players told me that it was one of the greatest 3x3 games they'd ever witnessed.

Finally, one of the major confusions for me in the first day was the balance between the crowd at the arena (in LPU) and the live-streamers online. I had originally intended to only be the voice for the live-stream, and thus, set out with the agenda of commentating only for audiences at home. But halfway through, my voice made it out into the PA system at the arena, and suddenly, every play-by-play description and every backstory was being heard by the fans and the players. It left me in a bit of a lurch: do I be hype for the crowd (but disturb the players) or I do the professional job for the broadcast. On Day 2, I was back to only-broadcast, which I think helped me focus better.

Day 2 was much more enjoyable. I was more confident after the first day's experience of my pace, about coordinating with the broadcast director and the on-floor PA, about when to interject background facts and when to talk about game. I had better energy and was able to react better to a lot of huge moments on the floor. One of the best things that happened was that I got an opportunity to interview several guests during the broadcast who sat next to me, including Dhruv Barman, Kiran Shastri, Amjyot Singh Gill, Richard Xalco, Lalrina Renthlei, and more. I've always been better in conversation and interviews, and jumping back and forth between them and the basketball action felt more in my wheelhouse.

Another lesson - for myself and for those aspiring to commentate on basketball events - was the importance of having 'filler' information. As in, background stuff to talk about that isn't necessarily about the live action. There are many moments in the game including timeouts or referee-disputes when I had to keep talking about something - anything - just to ensure that the audiences stay engaged. I did background research on Jalandhar, on the basketball history of Jalandhar, and several of the top players in action. In addition, I gave opinions about the changing style of basketball, on tactics, on history, of the larger picture of Indian basketball, and more. You can never be too prepared for the 'empty' time!

All in all, I enjoyed my time behind the mic, and enjoyed watching some of the highlights later posted by 3x3BL with my jokes and exclamations. It is a different challenge to be smooth without interruptions and stammers for a live audience, and I gained new respect for those who do this job at a professional level. I hope that this experience was able to improve my own game - and I'll look forward to the challenge again!