Satnam Singh's sensational basketball journey - from far-off Punjabi village to the elite IMG Academy to the NBA Draft, the G-League, and the Indian national team - has taken another new twist. On Thursday, September 6, the St. John's Edge of Canada's National Basketball League (NBL) announced that they have signed Satnam to a one-year contract for the 2018-19 season. 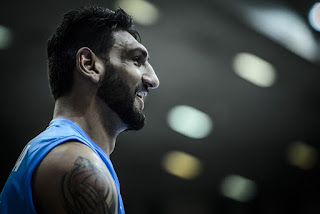 Satnam - a 7-foot-2 center from Ballo Ke village in Punjab - is the first and only Indian to be drafted to the NBA (Dallas Mavericks) and the first Indian to play in the G-League (Texas Legends). After two years with the Legends, Satnam returned to play for India's national team back home for the past one and half years. He was also the subject of the Netflix documentary "One in a Billion" in 2016.

After playing for the IMA Academy in Florida from age 14-19, Satnam declared for the 2015 NBA Draft and was picked 52nd in the second round by the Mavericks. He never made an NBA appearance but played for the Mavericks' Summer League team and their G-League affiliate, the Legends. During his two seasons with the Legends, Satnam averaged 1.5 points, 1.4 rebounds and 7.1 minutes per game. He shot .410 (16-for-39) from the field and .588 (10-for-17) at the free throw line. He has played for India at various major international events, including the three senior FIBA Asia Cups/Championships (2011, 2013, 2017).

The contract and negotiation with St. John’s Edge and Satnam was facilitated by Cornerstone Sport, a sport management and talent representation agency, which exclusively manages Indian skipper Virat Kohli, KL Rahul, and others. Bunty Sajdeh, CEO, Cornerstone Sport, said, "India is a young, emotional country and always looking for icons to look up to. And Basketball as a sport has always been popular in India. Satnam Singh, his journey this far and now signing with the Edge in Canada gives us all someone to look forward to, to follow and encourage."

"I am really excited to be a part of St John’s Edge," said Satnam. "It's a very proud moment, and I am sure this will encourage many others to pick up basketball as a career. I am very thankful to everyone who supported me and helped me become who I am today."

I interviewed Satnam briefly on Friday morning, where he added, "I am happy that I will get playing time, which I didn't get in my stint with the NBA/G-League. I had been in India for one and a half years and didn't find any opportunities beyond the Indian national team. I want to make the most of this chance to improve my game as much as possible over there. I feel that I will play with a lot of good players who will help me improve, and from there I hope to make it back to the NBA."

Dough Plumb, Head Coach, St. John's Edge said in a press release, "We’re excited to add Satnam to our team, he brings a history of NBA and International playing pedigree to our team. It’s remarkable to truly understand where he’s come from and where he is today. This is a great signing not only for our organisation but for our league."

The NBL of Canada was founded in 2011 and expanded to ten teams - including the St. John's Edge - in 2017. In their inaugural season in 2017-18, the Edge finished second in the Central Division and were defeated in the Division Finals (league semi-finals) by the eventual winners, London Lightning.
Posted by KARAN MADHOK at 20:59