With clinical brilliance, India's under-16 men's squad made no mistake as they blew past their opponents to win the 2nd South Asian Basketball Association (SABA) Championship in Kathmandu, Nepal, held from September 5-9. The triumph helped India showcase several of the country's exciting new basketball talents and secured the team's qualification for the larger challenge ahead: The FIBA Asia U16 Championship. 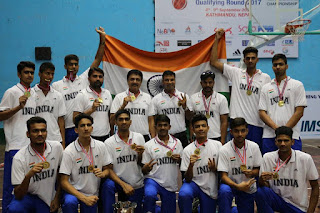 Held at Kathmandu's Dashrath Rangshala Stadium, the tournament was organised by the Nepal Basketball Association and included hosts Nepal, India, Maldives, Bangladesh, and Bhutan. India sent out a strong 12-man roster, coached by Vibhor Bhriguvanshi, of young players out of whom many had recently impressed at the Youth National championship in July.

India started the tournament in the most dominant fashion possible, demolishing the Maldives squad 152-17. India led 67-9 at halftime, went on a 49-2 run in the third quarter, and finished off the game with a 135 point victory. Rising stars Prince Pal Singh (31), Harshwardhan Tomar (20), and Binod Rajak (20) all contributed in this unreal scoreline.

India continued their hot streak on Day 2 against Bangladesh. Four Indian players scored in double-digits, led by Priyanshu's 32, in a comfortable 83-64 win. This was India's closest-margin of victory, and Bangladesh showed real life in the first half, but the Indian continent proved to be too strong after the break. 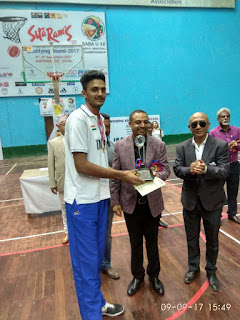 India faced hosts Nepal next, and were unstoppable once again, mostly because Nepal had no answer for the post-dominance of 6-foot-8 center Prince Pal Singh. Prince Pal dropped 45 points on the day to help India to a 106-39 victory. Abhisekh Singh scored 20 for Nepal in the loss.

On Saturday, India put on the finishing touches to their campaign, blowing past Bhutan to a 131-50 victory. Seven Indians scored in double digits include Prince Pal (20), Rajak (20), and Prashant Tomar (16).

Prince Pal Singh, one of the rising stars in Indian basketball, was named the tournament's MVP. India won every game by an average margin of over 75 points each. Players like Binod Rajak and Priyanshu also showed their potential. While Varanasi-born coach Vibhor Bhriguvanshi - elder brother of national team star Vishesh Bhriguvanshi - will be overjoyed with his first major international coaching experience.

India will now prepare for the FIBA Asia U16 Championship, set to be held in Malaysia later this year. Korea won the 2015 edition of this tournament in Indonesia, while India dropped to 13th place.
Posted by KARAN MADHOK at 21:20