For Lebanon's Al Riyadi, the final of the 2017 FIBA Asia Champions Cup presented a familiar challenge. It was the same competition, the same time of the year, the same arena, the same city, and the same opponent: China Kashgar. But after losing in a close battle in last year's final, the Lebanese squad bounced back in style to get their revenge. On Saturday, September 30, at the 2017 final of Asia's premier club basketball tournament, Al Riyadi blew out China Kashgar in their homeland to clinch the gold medal at the Chenzhou Sports Center in Chenzhou, China. 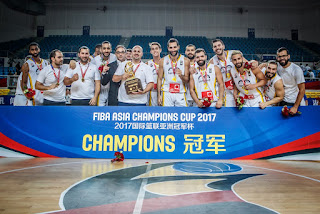 Ten of the top club teams from different countries in Asia took part in this championship, held from September 22-30. India's representative at the FIBA Asia CC was once again Dehradun's squad ONGC - champions of the Federation Cup. But missing a couple of their key players to injury or other professional duties, ONGC lost all of their preliminary round games to return winless from Chenzhou - just like last year.

In the rematch of the 2016 final, Al Riyadi and China Kashgar set up a battle of the titans. But from the tip-off, Al Riyadi were immediately the hungrier of the two squads. Al Riyadi jumped up to an easy lead in the first quarter and extended their advantage to a 20-point lead, 46-26 by halftime. Kashgar had no answers for Al Riyadi's imports Robert Daniels (21) and Quincy Douby (17) who led the way to an easy 88-59 victory. This is Al Riyadi’s second overall Champions Cup title after first winning the plum in 2011. They also gave Lebanon their fifth Champions Cup crown overall, tying Iran for the most titles in the tournament’s history.

Earlier in the day, Kazakhstan's BC Astana edged Iran's Petrochimi 81-78 in an entertaining, back-and-forth battle to secure 3rd place at the competition. Anthony Clemmons (22) and Justin Carter (19) led the way for Astana, while Behnam Yakhchali paced Petrochimi with 18 in the loss. 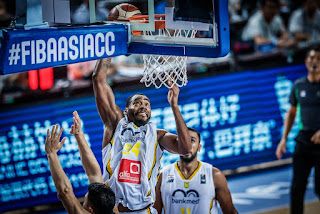 Once again, India's representative at this tournament were ONGC from Dehradun. But while the club side is dominant in domestic tournaments, they had a difficult time keeping pace with most of the talented squads at the FIBA Asia CC. ONGC were led by former India captain Trideep Rai in his first major stint as coach, and relied on the likes Anoop Mukkanniyil, Yadwinder Singh, and Riyazuddin to marshal them forward. But the squad had to survive without the services of two of their (and India's) best talents: captain Vishesh Bhrighuvanshi, who was on the team list but couldn't play due to injury, and Amritpal Singh, who has recently signed a contract with the NBL's Sydney Kings in Australia. ONGC were placed in Group B of the preliminary round stage along with Shabab Al Ahli (Dubai), Al Riyadi (Lebanon), Dacin Tigers (Chinese Taipei), and China Kashgar (China).

From the very first game against Dacin Tigers, ONGC were given a rude wake-up call. Featuring Indian-American former NBA player Sim Bhullar, Dacin raced to a 28-9 lead in the first quarter and didn't let their foot off the accelerator until they were leading comfortably in the final quarter. Led by Chia-Jung Chang (22) and Tzu-Kang Wang (17) Dacin won the game 94-62.

ONGC's tournament didn't get any easier, as, two days later, their next challengers were hosts and reigning champs China Kashgar. ONGC had no answers for Darius Adams, who led a balanced Kashgar attack with 25 to help his side to a 92-47 victory. ONGC struggled offensively except for a decent scoring night by guard Arjun Singh (17).

ONGC's worst performance came the next day against the eventual winners, Al Riyadi. The Lebanese side showed no mercy from the tip-off, taking advantage of ONGC's careless errors (31 turnovers) and soft defense to drop over 30 points in the first three quarters of the game. Al Riyadi's offensive explosion led them to a 127-51 victory, led by Quincy Douby (22), Amir Saoud (21), Jean Abd El Nour (18) and Wael Arakji (17).

ONGC still had an opportunity to make it out of the group stage against their closest opponents in the group, Dubai's Shabab Al Ahli, in their last preliminary stage game. ONGC stayed neck-to-neck with Shabab throughout, trailing only 39-36 in halftime. But a scoring drought in the third quarter cost ONGC some momentum, and despite an exciting late charge, they couldn't stop Shabab from surviving with a 72-71 victory. Qais Omar Alshabebi led all scorers with 26 for Shabab while Khalifa Salem added 16. Veteran ONGC guard exploded for 20 points while Arjun Singh pitched in with 17 and 10 rebounds in the loss. 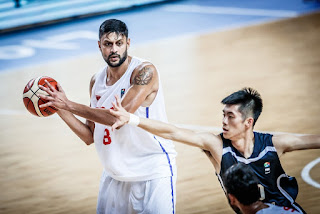 The loss left ONGC at the bottom of Group B with a 0-4 record and knocked them out of qualification for the knockout stage.

Without Bhriguvanshi and Amritpal, there were no individual superstars to rescue ONGC in crucial stretches, but the team featured a balance of players who all averaged around 10 points per game, including Mukkanniyil, Riyazuddin, Arjun Singh, and Yadwinder Singh. Mukkanniyil and Yadwinder each averaged 9 rebounds per game, too. Much of the responsibility for carrying this squad came on the shoulders of veteran (over 30) players, and despite their best efforts, they simply didn't have enough in the gas to eke out a victory.